One pin that's been on my map no matter what my plan has been, has been the North Rim of the Grand Canyon. I've never seen the canyon and knew that if I'm passing this direction then I really need to make sure I have a stop here. I've planned ahead and have reservations to camp at the very nice campgrounds there.

So, just like that, NAFO is over, it's early Sunday morning and I'm loaded and ready to go. First thing is tracking along I-70 to Grand Junction again. After that, it's all new stuff for me. First, it' new state day for me. Never been to Utah before but I hear it's beautiful. Where the welcome sign is, well, that's kind of meh.

I already had it on my route but I'd talked to someone on my trip who found out where I was going and said "When you see the exit for Cisco, take it. That'll take you to where all the car advertisements of the 1980' were filmed, definitely worth it." I was able to easily find the exit and took it.

Side note here. Ugh, steering bearing issue again it seems. As the trip has gone on, when braking I started feeling a light click, that has moved to a bigger clunk. It's getting bad enough that I am getting a slight shimmy today under heavy braking. Not good. Thankfully I brought a decent tool kit and will address this at my camp site.

That said, UT-128 through Cisco is some of the worst maintained pavement I've seen on this trip. My steering is NOT liking this at all. I notice that I have a choice after Cisco to turn south or to stay on the road which will put me back onto the smoother I-70 which I'm currently running parallel to at this point.

Thankfully, the left turn put me onto some seriously beautiful smooth new pavement. They need to continue this back to the Interstate.

Forgot to change my gopro batteries and got absolutely zero footage for the first part of 128, but it's an eerie hazy transition from flat desert to the start of the canyons. Before you know it, you are here.

I'm so happy the road smoothed out because this ended up being one of my absolutely favorite roads of the trip. Not so much tight twisties, but the scenery as you turn your head every direction makes it great to be on a motorcycle. Still no gopro in here, missed a lot of great stuff.

Once I hit Moab I turned south, and even though not as good as 128, the sights along UT-191 were still enjoyable.

At 11:30 I entered Mexican Hat and looking ahead at the map I opted to stop for lunch. I saw a sign that said "Pizza, Beer, Sandwiches" and that seemed like a good idea, well, at least the sandwiches did. I topped off the gas tank and rode across the street. After parking and getting all my gear off I walked toward the front door when a man sitting at the picnic table out front asked if he could help me. I told him I was looking for lunch and he laughed and said there's no lunch. I asked him when he opens and he said he's open for beer and the RV site, but the kitchen doesn't open till 1pm. Seemed strange to me to wait till just after lunch to open your kitchen but whatever, I thanked him and went on my way.

This past spring my parents unknowingly planned out today's route for me. My dad sent me a photo saying they went to where Forrest Gump was filmed for his home and sent me a photo of the street where he started running. I'd seen other folks previously post pictures where he stopped running, so this meant I had to go there. Just south of Mexican Hat as you approach Monument Valley is "Forrest Gump Point." Here he is just before deciding to stop.

There were quite a few folks getting photos here. I had my camera set up on my little tripod and had to wait on some girl posing for 62K photos her boyfriend was taking for her Instagram account so that I could grab my photo.

Of course I had to take a bike photo too.

Right after that, it's another new state day. Arizona.

Every once in a while a little bit of this. 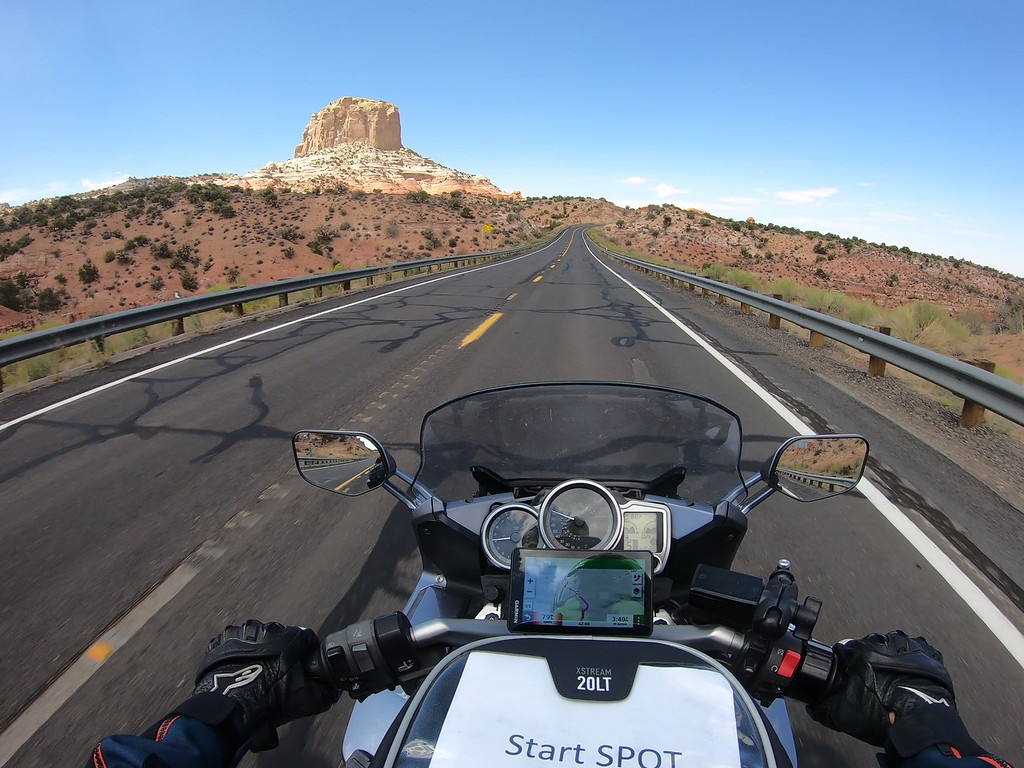 I stopped just outside of Page Arizona to get a photograph of the real horseshoe bend. It was super hot and I saw the lines to get to the pay booth just to get in and park so you can walk a short distance for a photograph. Not doing all that today, so I skipped it and continued riding the boring stuff.

And then all of a sudden I entered this little cut through a mountain. 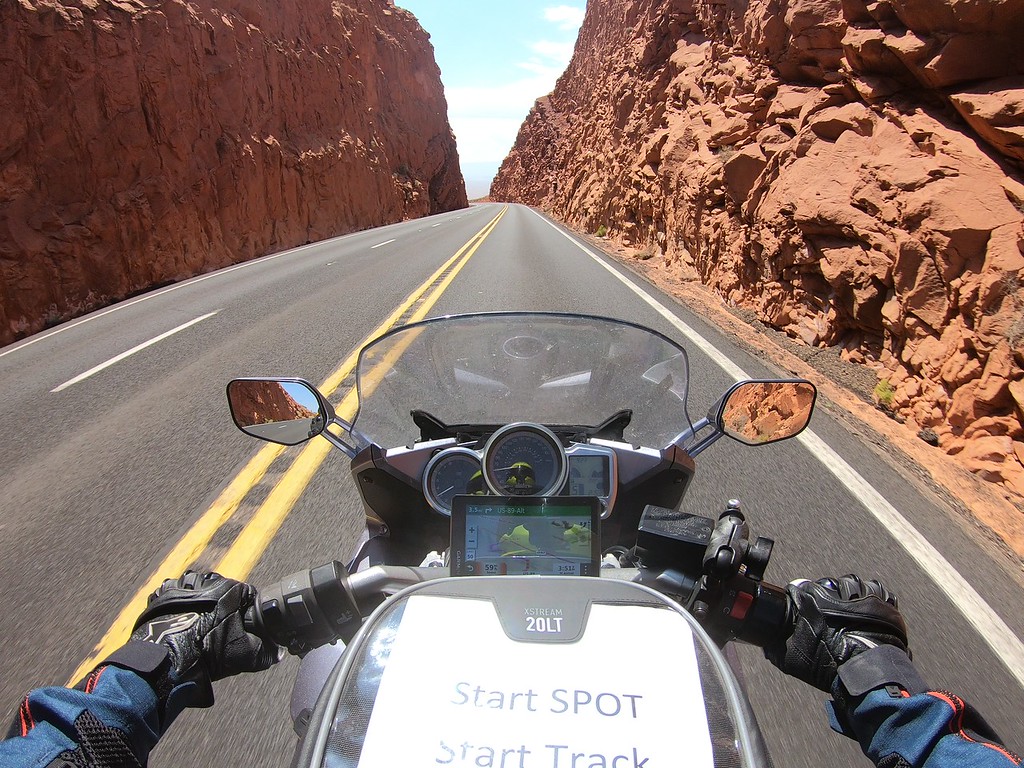 At the end of the cut is a left turn and you are now hugging the wall of a cliff and are very high up dropping down in altitude quickly to the floor below.

Then the scenery started getting interesting. Additionally, the more interesting the scenery got, the higher the air temperature went. I was seeing 104F again running across the valley floor. Thank goodness I bought that new camelbak bladder back in Leadville.

The Vermillion Cliffs were one of many things I'd see on this trip that you might have seen photos or video of, but you don't really grasp the scale of things until it's right there in front of you. The small cliffs in the foreground are seriously big cliffs, but the ones in the background absolutely tower over them. This was definitely a hot and jawdropping ride. 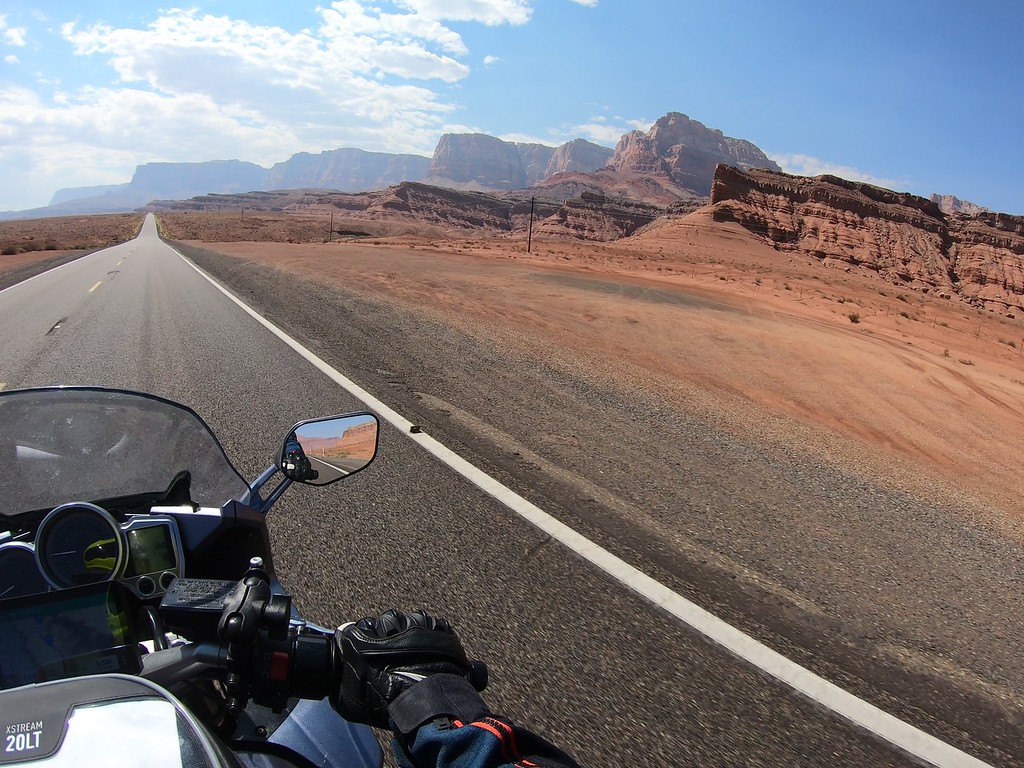 Climbing up out of the valley toward the Grand Canyon you get a last look back toward the cliffs.

On arrival at the Grand Canyon gate I noticed it was $30 for a car and $25 for a motorcycle. I've already paid $60 for my camping, so I presented my VA card. I was rewarded with a military park pass that would do me well later on in the trip.

As I approached the canyon, I recalled the advice given to me by Marty (OFace on the FJRider). He said since it's my first time, that you'll get glimpses of the canyon, but don't peek. Don't look. Just keep going. When you get to the parking lot, walk out to one of the overlooks and then just look up and take it in. It was hard, the canyon was flashing through the trees in the corner of my left eye and I wanted to look over so bad, especially at the boring slow speeds of a National Park. I kept focused on the road ahead of me and made it to the parking lot. I put my hat on and pulled it down low so I could only see the walkway right in front of me. Then I made the long walk to the hotel veranda, where I set my gear down on a picnic table, approached the wall and looked up.

I hate admitting when Marty is right, but that was definitely the way to do it. Once again, photos do not convey the scale of things and when I pulled my head up it definitely took my breath away.

Having done that, I took some notes on signs they had for suggestions and headed back up the road to the campgrounds to get checked in. I got my site all set up pretty quickly.

Then I grabbed some clean clothes and my shower stuff and made the trek across the campgrounds to the laundry/shower building. On arrival there's a big sign out front and on each door saying "Closed for the season." Seriously? They still have labor day weekend coming up and the campgrounds are pretty full but no showers. Not good. I sweated my butt off in that 104F heat today and remember that it's Sunday and I haven't showered since Friday.

I wasn't sure what I'd be able to buy in the camp store so I'd brought some Mountain House Adventure dehydrated meals as well as one of the Omeals "MRE" in the Southwest Style Chicken flavor. It was delicious but certainly not enough food. I grabbed a mini chef boyardee and some dessert at the camp store to supplement it. Then I settled down to a nice fire in the firepit, enjoying this as I wouldn't be able to light a match once entering California. The camp store sold some good dry wood, so easy to light and burned really well.

As I waited for the coals to burn down, I pulled out my camera to take advantage of the lack of light pollution way out here. I'd heard that my wide angle lens worked really well for some astrophotography so I was determined to give it a try and see what I could figure out. I struggled for a while, upping the ISO and shutter speed and still getting nothing. After four or five of these shots I remembered to take the lens cap off. Hey, it was super dark out there and I couldn't see it was on there. I got a few shots and ended up liking this one.

After that, it was time to climb into by bedroll. I planned to be up early to watch the sun rise over the canyon.