It's Friday and I have had a plan for my riding today for a while. Each time I've come to Colorado I've wanted to ride CO-141, but for many reasons, I've always had to scratch it off the itinerary. This time I made it the mission instead of an add on. Today I'm finally going to ride it.

I'm up and preparing to go fairly early. A few others beat me out onto the road this morning but most are still sleeping away while their rides wait patiently to be taken out to hit the roads. 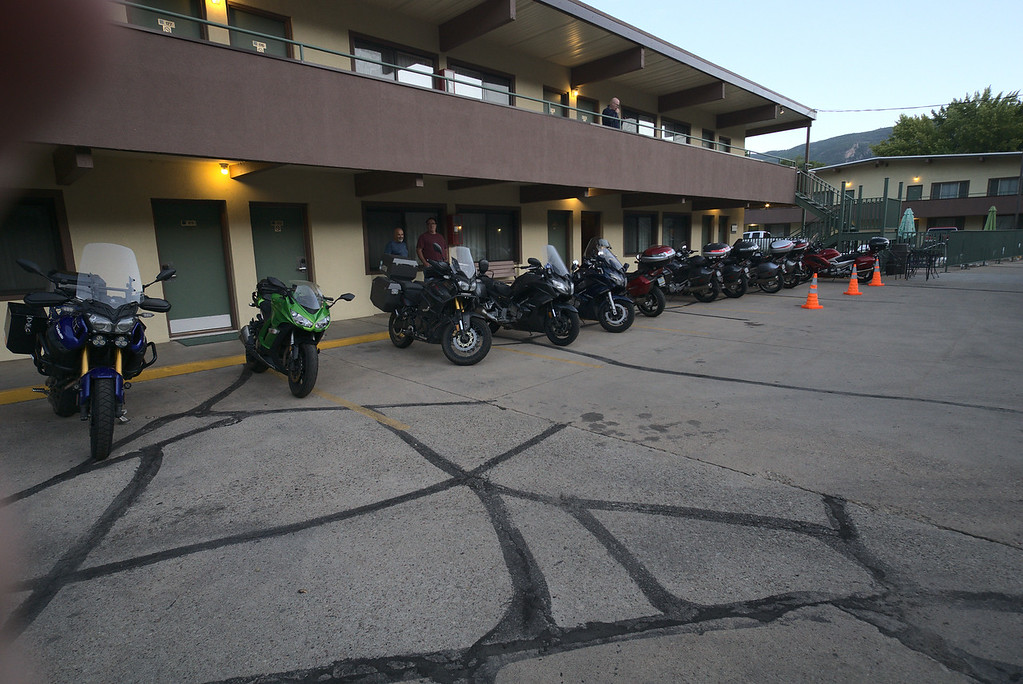 Heading out of Glenwood Springs, the sun is hitting the surrounding mountains just right. They really light up under that early morning sun hitting at such a low angle. 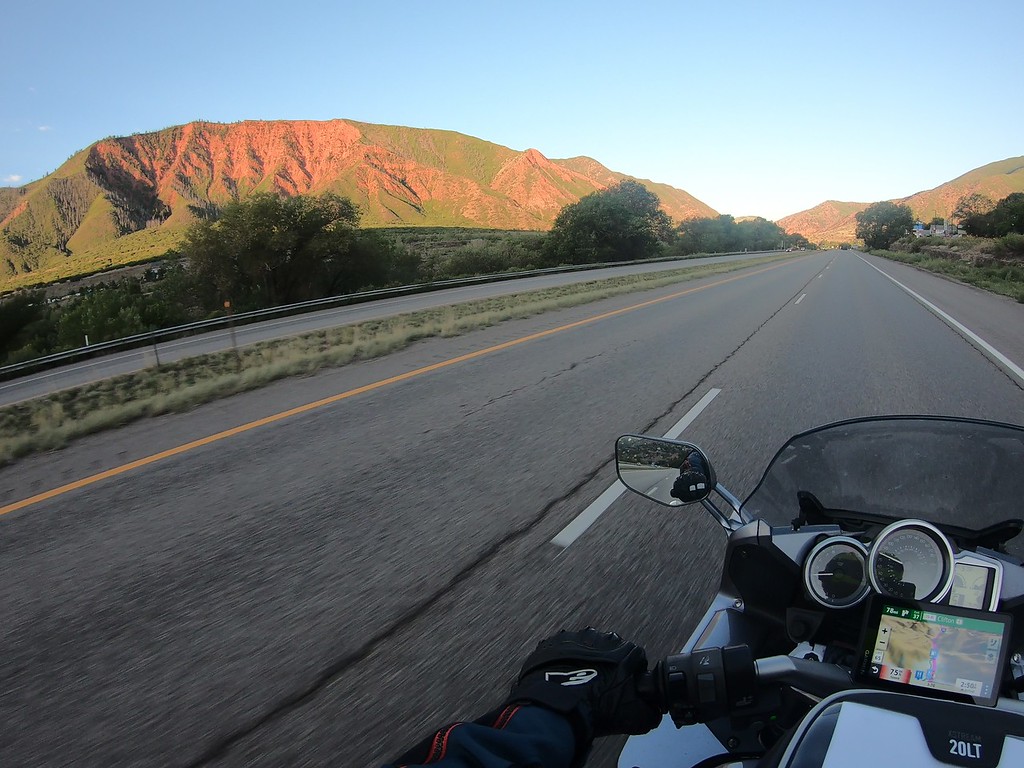 As you approach Grand Junction, I-70 gets fun and scenic with the curves, canyons and the dam. 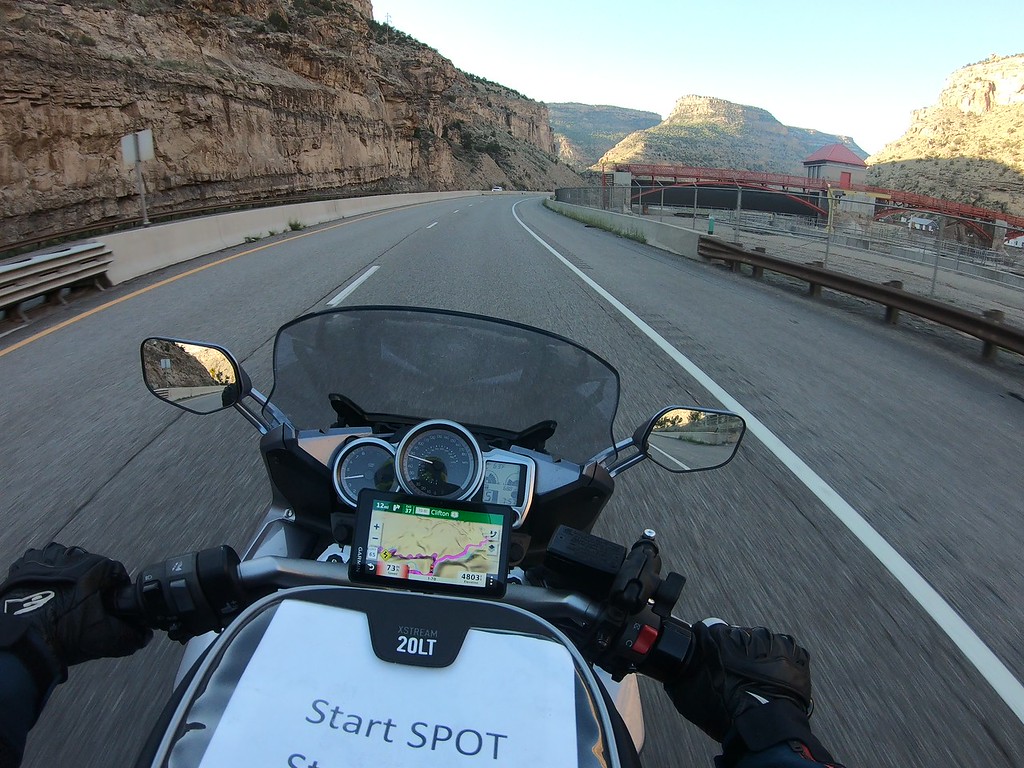 I stopped for gas in Grand Junction to top off, remove some layers and get ready to head up 141. The terrain changes so much along this road, it starts off with these light colored small canyon areas.

Then it moves into these open farming fields with cliffs in the background. 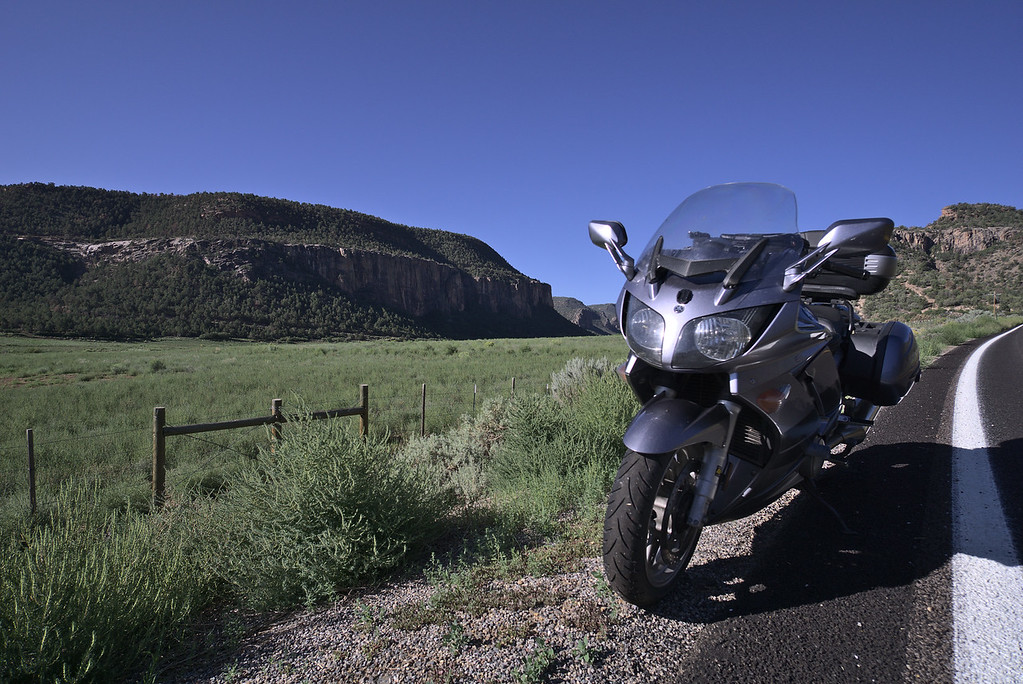 While taking that photo, another FJR rider came past me. A little down the way he was stopped and I passed him. We did this back and forth for a while and eventually I stopped where he was stopped and we chatted a bit. Eventually we'd ride together for a little while and would catch up with each other back at the hotel. 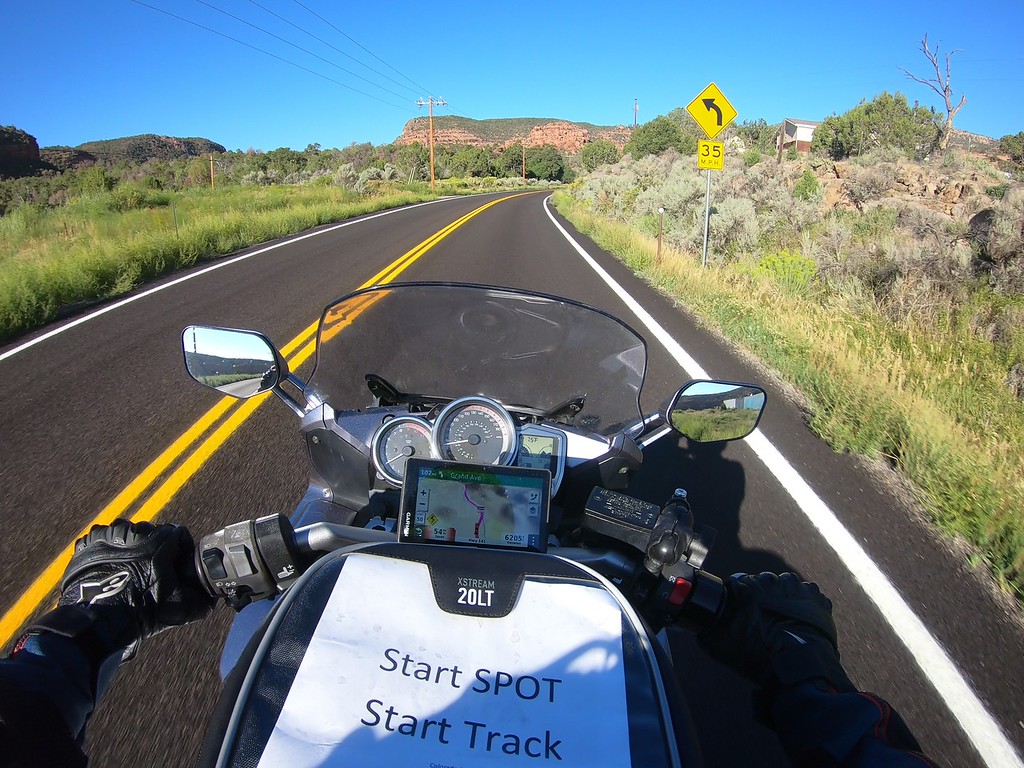 Look at that amazing pavement! 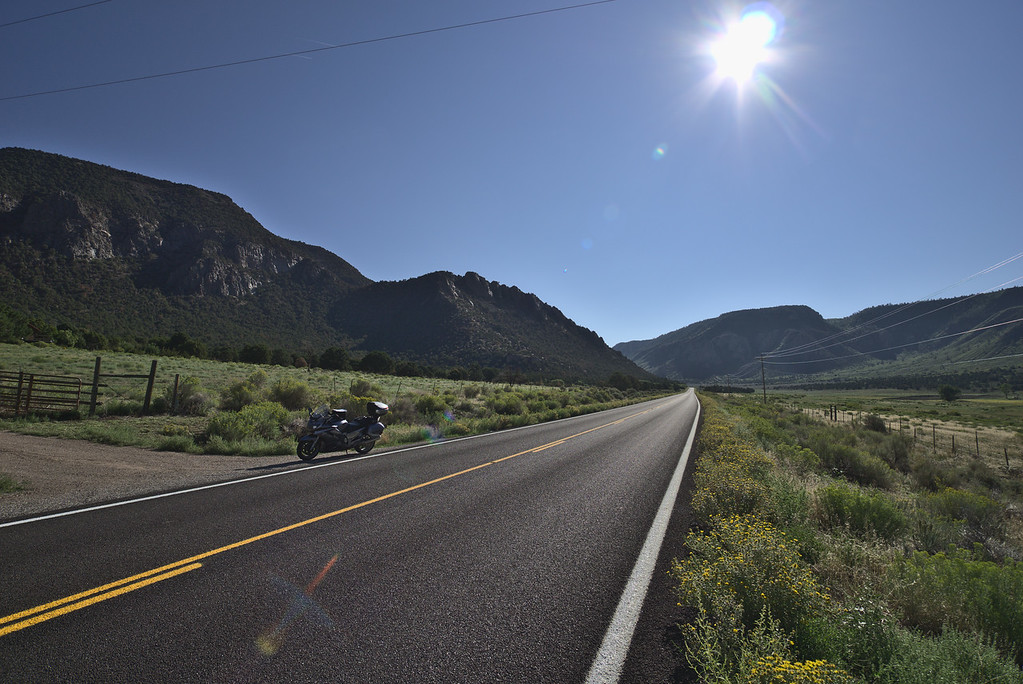 Eventually the canyon walls start to rise around you and the rocks take on a distinct reddish color. 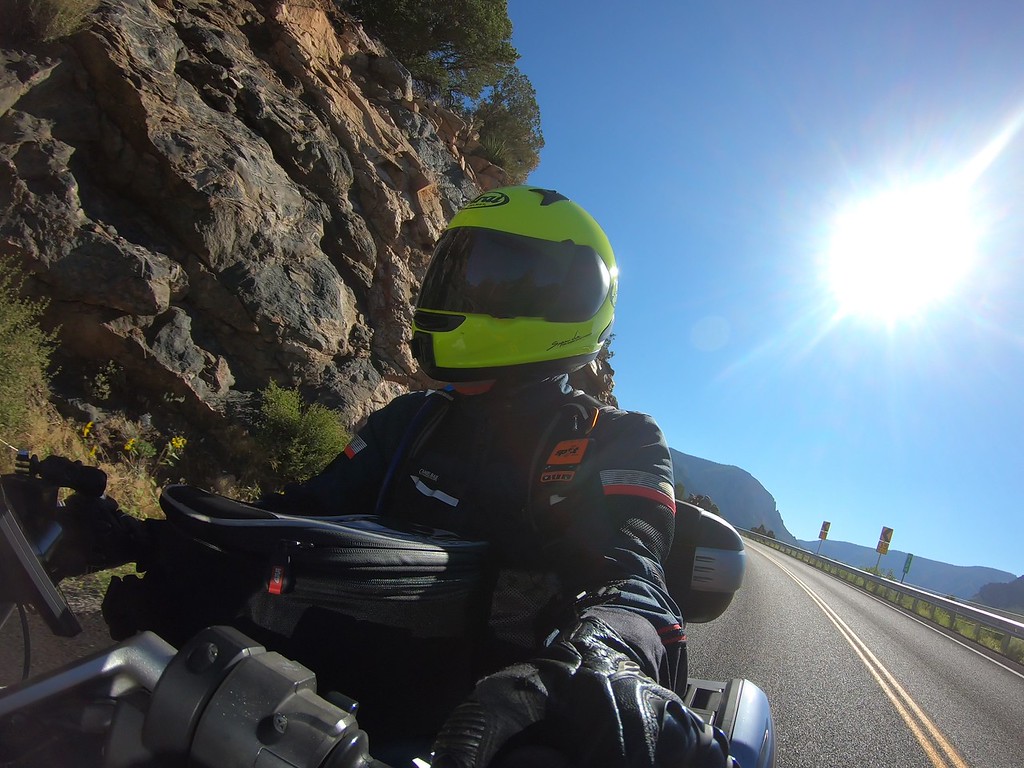 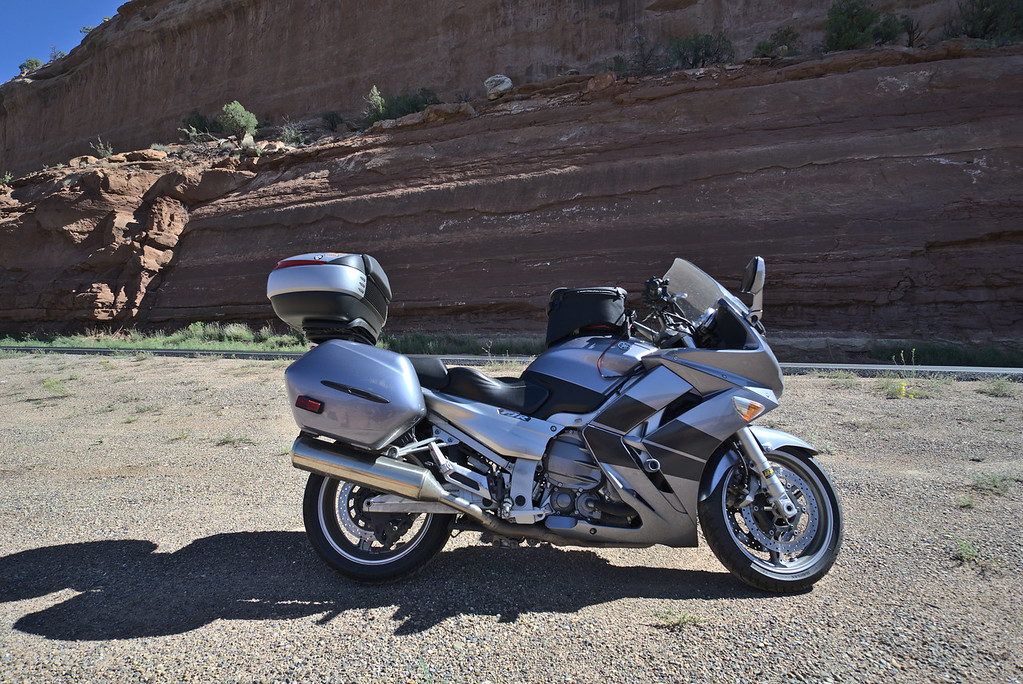 Then you climb up a bit out of the canyon and have some dangerous drop-offs to navigate with the river far below you, but still with cliffs towering above you.

Lots of folks rode right past the following viewpoint. To be fair, you can't see much from up on the road to know what you are missing.

Getting that photo, of the full horseshoe, is not for those scared of heights. There's a lot in the way unless you walk all the way up to this edge. 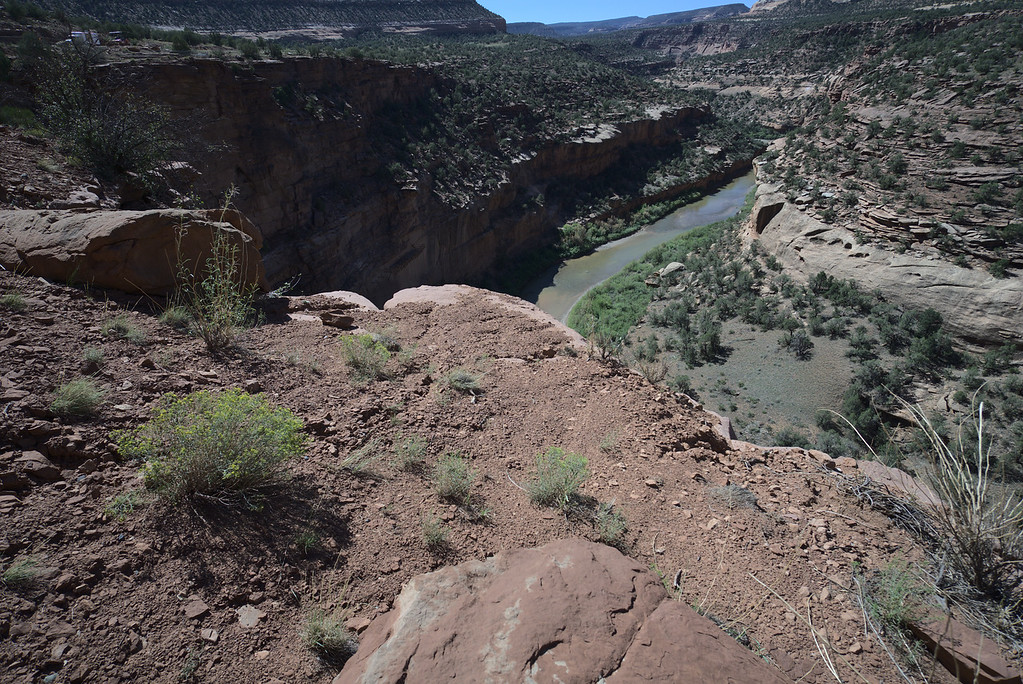 Looking down, you can see the toe of my boot as to how close I was willing to get to the edge. Also, note that motorcycle boots are NOT ideal rock scrambling boots.

I'd like to take a moment and comment on the pavement for much of this road. Maybe it's good that I didn't ride it before because, as you might have noticed from the previous photos, a lot of this road is freshly paved. It's so smooth and beautiful, what a joy to ride on.

Here I've caught up to the other FJR rider, I think he said his name is Dan. I am terrible with names and had to learn so many on this trip, I hope I got it right.

Finally out of the canyon, you head into the beautiful area around Telluride.

At this point I'm starting to get really hungry. I'm headed into Ridgway and start scrolling through restaurants on my GPS. I'm really wanting some pizza, and suddenly I see it, laugh and know exactly where I'm headed. My boss from my previous job was named Panny. When traveling through Ridgway with the family a few years ago we noticed "Panny's Pizza" and had a good laugh about him owning a pizza restaurant in Colorado (not really).

Today, I no longer work for Panny, but I'm stopping to have some of "His" pizza.

I ordered up a personal meat pizza, it was good and I ate every bit of it.

After that it's a boring slog up to Montrose and dealing with the traffic in that town. While stopped and filling up with gas, a guy comes over to me and points at my bike saying "Gen 2 right?" He's a former FJR rider, used to be on the forums way back and even organized some rides apparently. We had a good chat for a bit before he went his way and I went mine.

I'd read that the ride over Grand Mesa was supposed to be really nice so, I chose that of the three alternate routes I had to get back to Glenwood Springs. I do love running up 133, but I've done that and am trying to see new things on this trip.

Montrose to Delta is a hot slog of a ride. Then you turn and go through Orchard City and Cedaredge and it's all pretty boring, flat, straight with a little bit of traffic. I'm pretty disappointed in this ride so far and thinking I should have hit the black canyon or something else.

Just a few miles north of Cederedge all of that changes when the road shoots up into the sky. In just a bit you are on top of the Mesa with a view that stretches out before you.

On top of the mesa was this beautiful lake. I had to get a photo of this and hopped off the bike and walked about 10 feet to get a better view. Just getting to this point I was out of breath. Cedaredge is at 6,230' elevation but up here you've climbed up to 11,332'. I watched folks boating around in the lake and thought how much fun it'd be to bring my son and our canoe up to this lake. Then I realized that at this elevation we wouldn't be able to paddle and would have to just float around until someone local could rescue us.

Coming around the other side of the mesa you get similar views looking out toward I-70. Down below me in this photo is a road that made me wish I had an ADV bike or had brought my land cruiser with me. 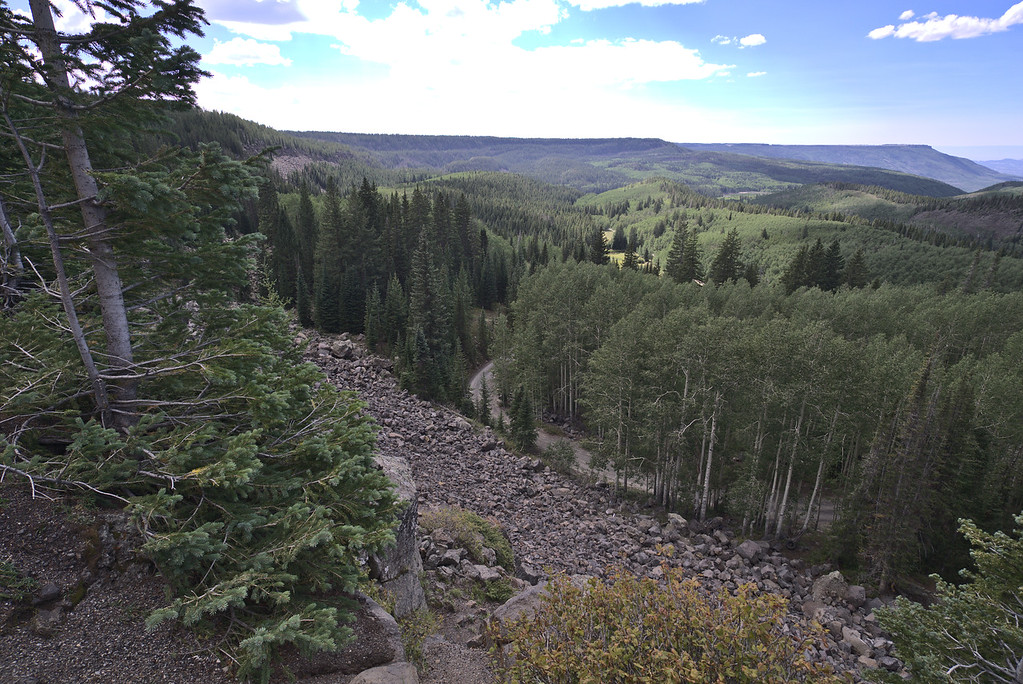 After that you drop off the mesa almost as quickly as you go up it. Then approaching I-70 you hit some of the most fun curvy roads in the area. Then it's a ride back down I-70 to Glenwood Springs.

A group of us walked over to the Mexican restaurant there on the same property as the Inn and enjoyed a fantastic dinner. I thought the prices were a little high, but the food was excellent and so flavorful.

Looking back at the menu, I believe this is their Chile Verde Plate. (Tender chicken or pork in a special Mexican green sauce. Served with rice, beans, and choice of tortillas.) 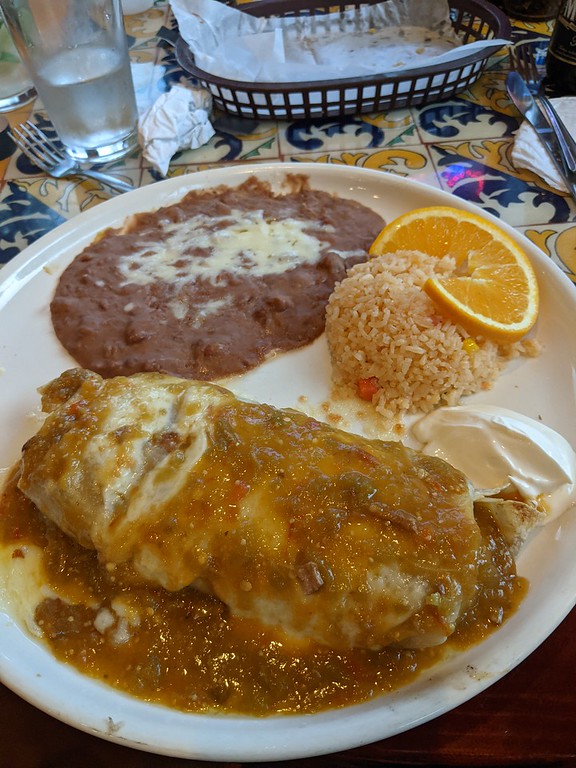 After that it was back to the parking lot to tell more tall tales of the day's adventures before heading off to bed.

Posted by GixxerJasen at 2:10 PM