Off the bike day in Glenwood Springs.

On previous motorcycle trips I never really had a lot of time, so they are always whirlwind trips. This left me disappointed becaues there were always things I wanted to see that didn't involve riding the motorcycle, but with the limited time, I had to rush rush rush to keep to the schedule. I also exhausted myself quite a bit with being on the bike non stop. This trip I decided to build in a few days off the bike to see some things, to give my candy butt a break, and get a little exercise in. I also wanted to ensure that I was back in time for the banquet tonight.

Today would be a day that would test my ability to deal with the frustration of changes and challenge me to be more flexible.

First up, I really wanted to do a little hiking on this trip. I'd done some research and Hanging Lake is supposed to be a really good hike. Due to the popularity of the trail, they limit the number of people per day on the trail by issuing reservations. I had reservations for today made months ago. I chose an early time so I could get up there to see the lake in the early morning light. I did have to ride over to the trailhead, and was possilby one of the first ones out of the gate this morning.

Alas, I arrived at the rest area that serves as the trailhead parking lot to find this.

I should have checked my email. I'd been staying on top of this one since it had been closed when Glenwood Canyon was closed for the mud slides, but it was reopened before my trip. Apparently though, the rain two days previous had caused a minor slide that damaged the trail and I was issued a cancellation of my reservation and the trail was closed.

I tracked around to another rest area where I confirmed this and looked up some other trails in the area. The first two nearest to the rest area I found to also be closed with gates closed across the trailhead. I rode over to Boy Scout Trail in Glenwood Springs but there wasn't really a place to park except on the very steep sloped street. Thus, I headed back to the Inn to regroup.

I'd planned on seeing Doc Holliday's gravesite today so decided to go ahead and do that. It's walking distance from the Inn so I grabbed my camera and camelbak and started walking. The Inn sits right on CO-82 which is a major thoroughfare and the route to Aspen. It was so busy and noisy I was determined not to walk here and immediately turned right to take some back streets up to the trailhead.

The trail is a very nice, well maintained, walking path. It is a bit steep of a climb, and with Glenwood Springs being at 5,700 altitude, it's a little strenuous but thankfully it's still early and cool enough that I make my way up without too much huffing and puffing and sweating. 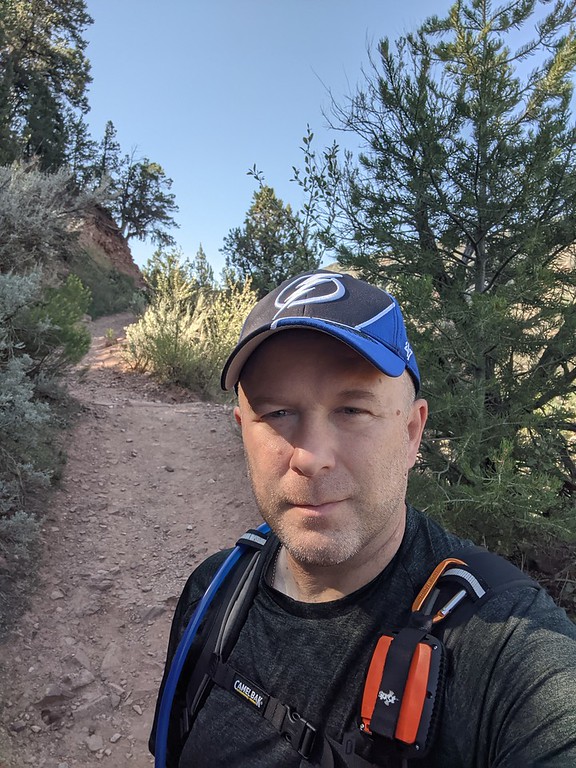 First up, Doc might be the most famous person buried here, but not the only one. Harvey Logan, aka Kid Curry, who ran with Butch Cassidy and the Sundance Kid as a member of "The Wild Bunch" is also buried here. Apparently, after performing a train robbery nearby he was on the run from a posse when his group came upon a rancher. After making demands of the rancher they departed where they were defeated by the latest in technology at the time. The Telephone. Turns out the rancher had a phone and placed a call into the town where the posse was and tipped them off to where Harvey and his group were headed. There was a gunfight and Harvey lost his life and ended up being buried here.

Next was over to Doc Holliday's grave marker.

Folks like to come and leave little mementos on his grave.

Reading the various placards around the cemetery fill in a lot of information. This isn't Doc's actual grave site. There was a nice explanation of what a Potters Field was. Basically they believed at that time that everybody deserved a proper burial, even if you were a criminal or very poor. Thus a section was set aside for these folks. As Doc died alone and destitute, he wouldn't have been able to afford a decent burial and was likely afforded a wooden box, a space in the Potters Field, and a wooden grave marker. That grave marker wouldn't be maintained and would have deteriorated long ago. In the 1930's all the grave records were lost, so we know he's buried in this cemetery, but don't know exactly where.

I took a few photos from some of the overlooks that show how high up you have to hike, the first photo looking off toward the inn. 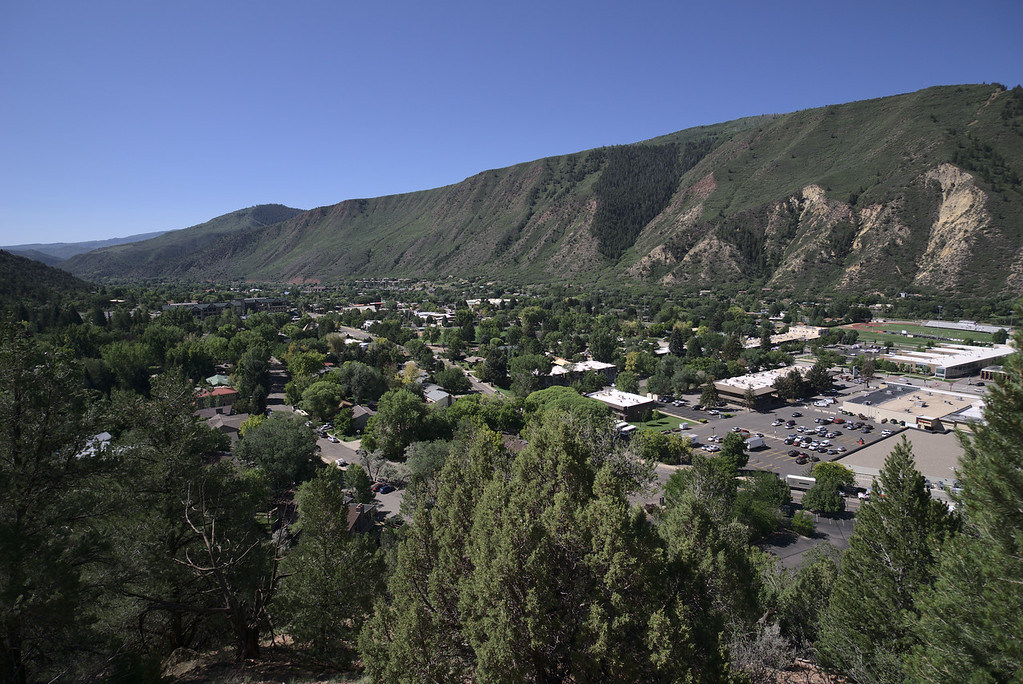 The second one looking in the direction I intended to walk to find lunch. What an amazing little neighborhood of eclectic houses many with well maintained yards and beautiful flower gardens.

Looking back down the sidewalk through the neighborhood. 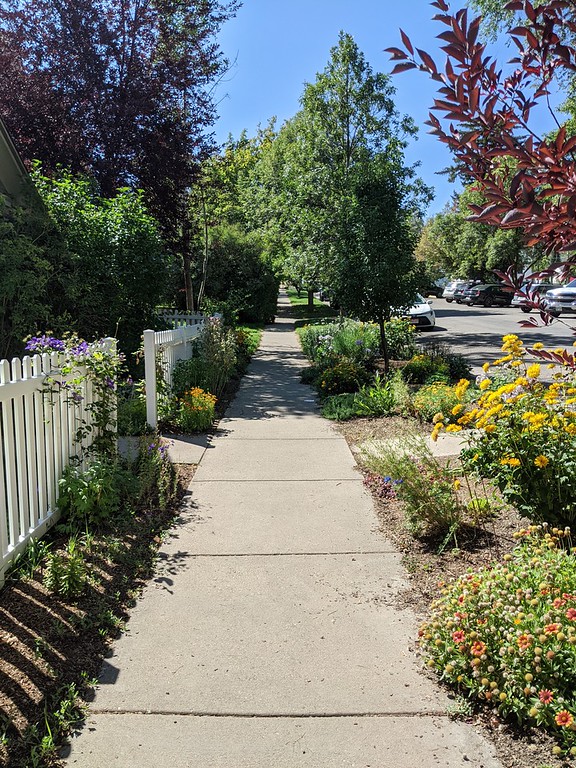 I knew down on 82 toward the main part of Glenwood Springs that there were a lot of restaurants. I was checking my phone looking at what was available and one stood out to my mouth and stomach. I decided to hit up Masala & Curry.

I ordered up the chicken Masala with some garlic naan bread. That was some of the lightest softest naan bread I've ever had. The first picture shows the order as it came, which doesn't look like a whole lot of food.

But I managed to fill my plate twice and was definitely full when I left. Delicious food and excellent service here as well. 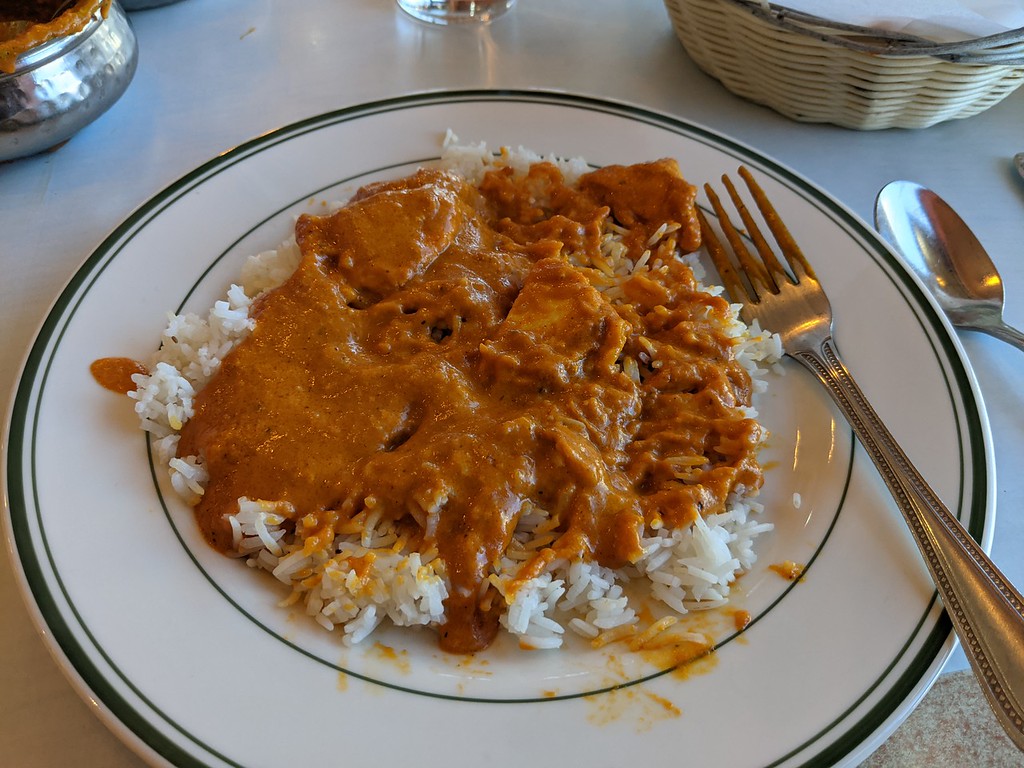 After finishing lunch I headed back to the Inn to do some laundry and confirm my plans and routes for the upcoming days. I would have my flexibility tested once again.

I'd be making my way to and through California over the next week. I was very excited to see the Sequoia National Forest and had planned a couple of camping spots there. Thankfully all the fires are up north so I'm hoping smoke won't be an issue. My first camping in California will be just north of the beautiful Lake Isabella area. As I'm looking at my routes, Google informs me that my route is affected by the French Fire. Google is only too happy to show me a map.

That marker just north of Kernville is my camp site. I go back to my email again and there's an ominous email very recently from recreation.gov. Opening it confirms my dread that my camping reservation is canceled. I start trying to figure out alternate plans that will still be able to include the camping I have planned after this. I'm nervous about taking that 178 because who knows what will happen with the French Fire in the coming days and I could find the road closed and have to backtrack. I need a plan that gets me around the fire on roads likely to be open. The options are slim and I decide I'll have to hotel it in Bakersfield.

I purposely left my laptop behind at home this trip as it's big and bulky and heavy and I didn't want to bring it. However, I don't know how folks deal with only a phone screen because trying to plan and look things up is 10x harder on a tiny touch screen compared to a laptop with a mouse and keyboard. One advantage I have on my side is that my wife absolutely LOVES looking up hotels and comparing and stuff. I decided to "Phone a friend" and call my wife and put her on the case. Within an hour I have a text message from La Quinta in Bakersfield with my reservation information on it.

Laundry completed, I had a lazy afternoon hanging out with folks who had also opted to hang around. Finally we made our way over to the park next door to eat our fantastic banquet put on by the local Kiwanis club. I spent time consuming cheap beer, good food, and conversing that I forgot to take any photos. We moved back to the Inn and spent more time in the parking lot telling even greater lies than previous nights all spending that last evening togther before everyone split up for their various upcoming destinations.

Getting back to my room late, knowing I had to be up early and had a longish day ahead of me, I decided to forgo a shower. I'm going to spend most of tomorrow hot and sweaty alone, so I can get by with one night considering the easy day I had today. By the way, this is what is known as "Foreshadowing."