Today is get to NAFO day. It's in Glenwood Springs Colorado, and I'm starting off in Dumas Texas. I get up before the sun is up and hit the road. I tried to stop at McD's down the street for a quick breakfast, but the lobby is closed. This would be a theme throughout the trip, trying to find food I didn't have to eat in the parking lot.

It was a bit brisk at 62F with my Rev'it Tornado 3 mesh suit without my liners but I knew the sun would be up soon to warm me up.

It wasn't long before I was passing familiar landmarks like the Capulin Volcano. 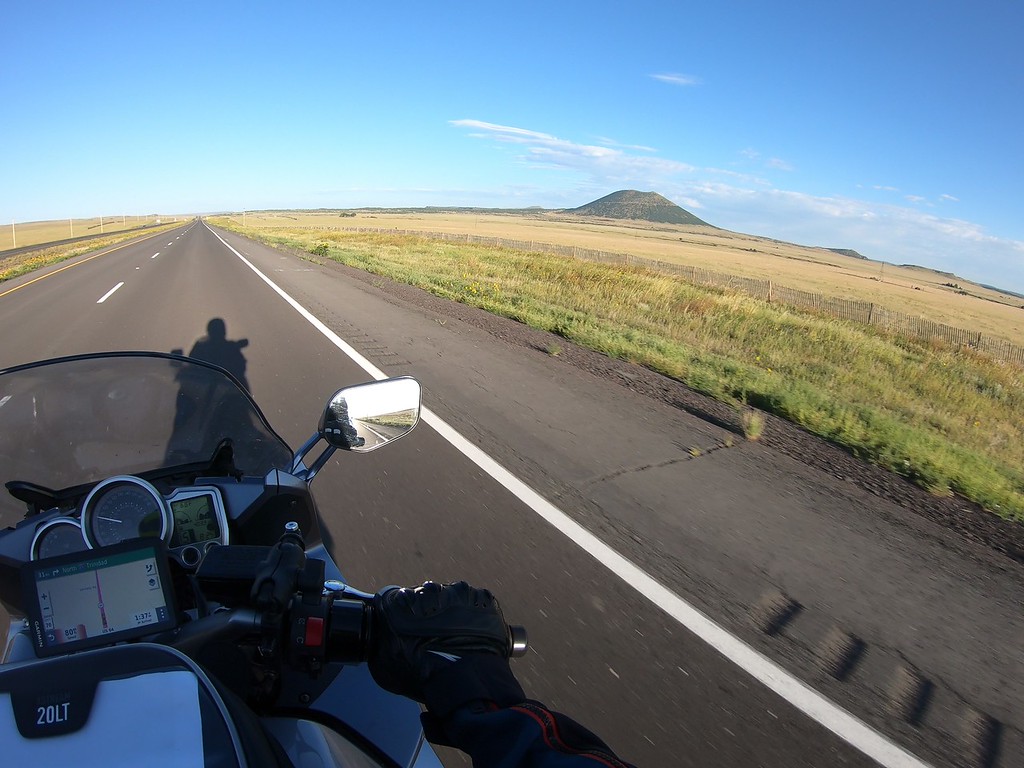 Passing long trains. Not sure I'd ever seen one with engines in the middle. This was a long one with two engines at the front, four in the middle, and two at the back. 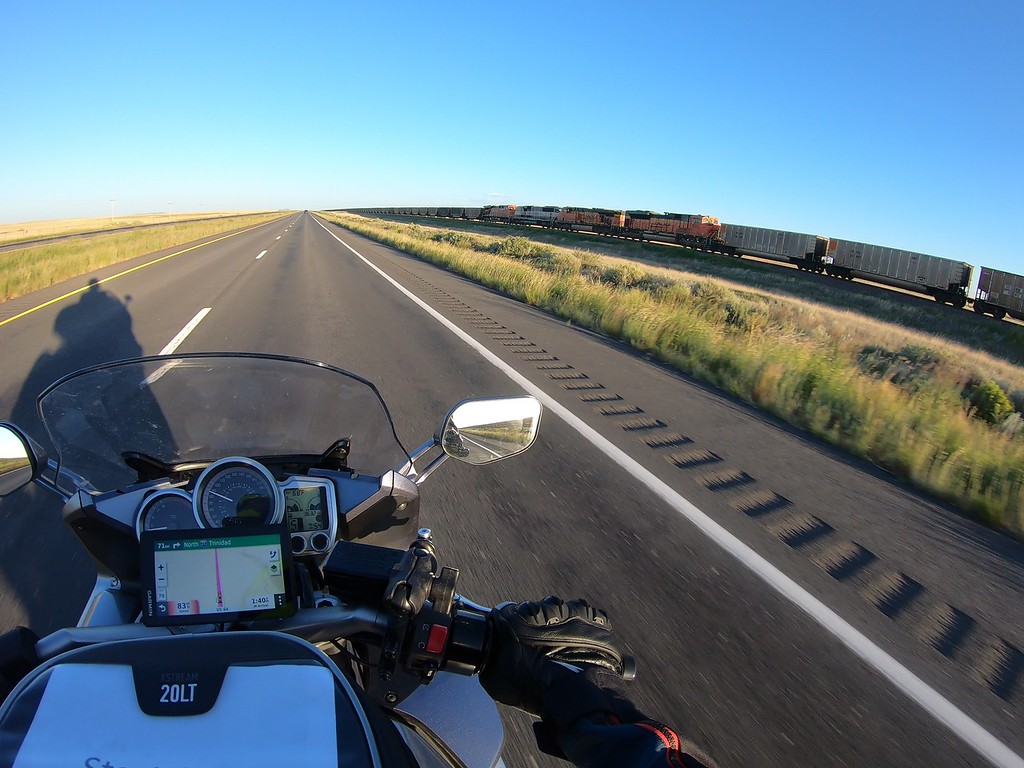 Before you know it, you are getting close to Raton New Mexico and you come over a rise and get your first glimpse of the Rocky Mountains. I'm not ever able to ride this stretch of the road without a huge smile on my face. 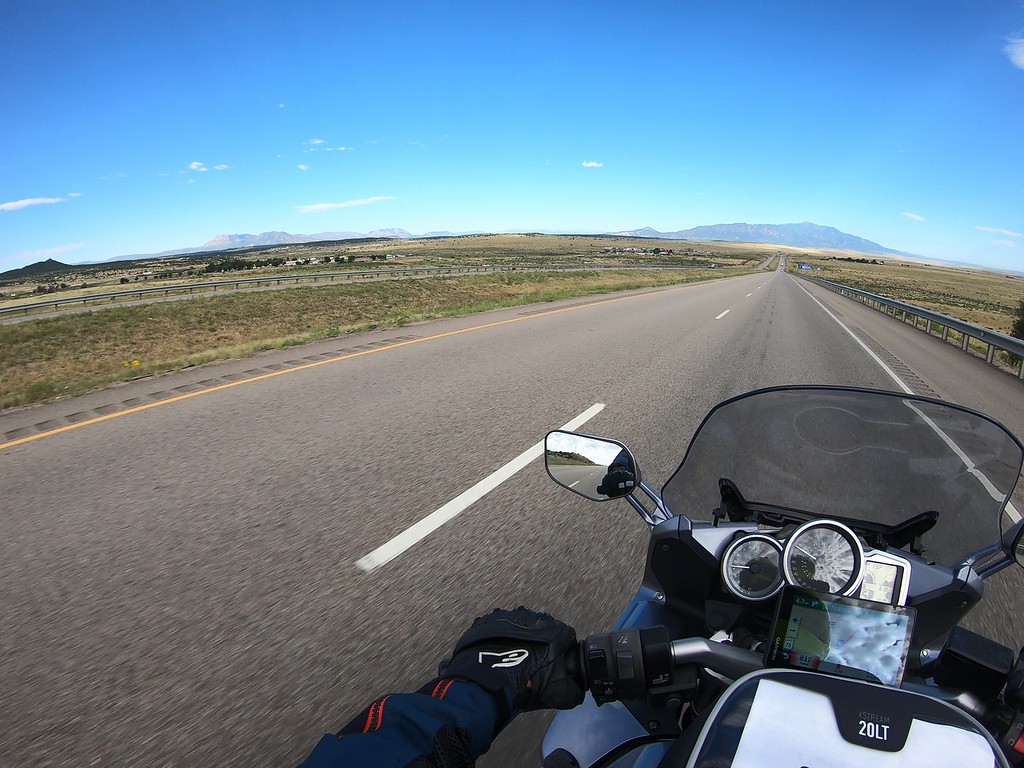 Colorado 69 is one of my favorite roads. It's not the best road, but it has some nice sweepers along with amazing scenery as you travel up the valley toward US50. It's always a nice way to start a ride here, I call it the "Colorado appetizer." 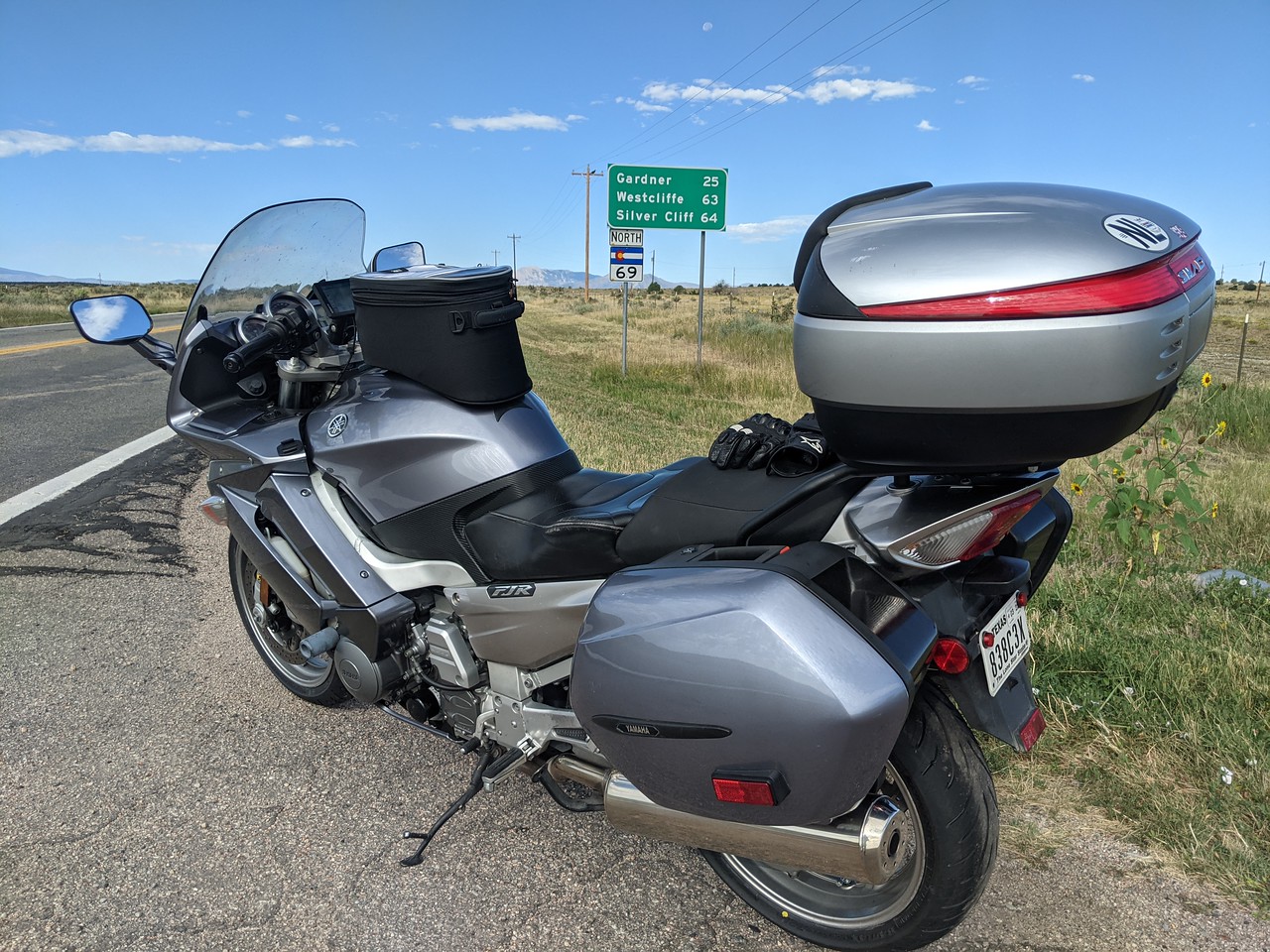 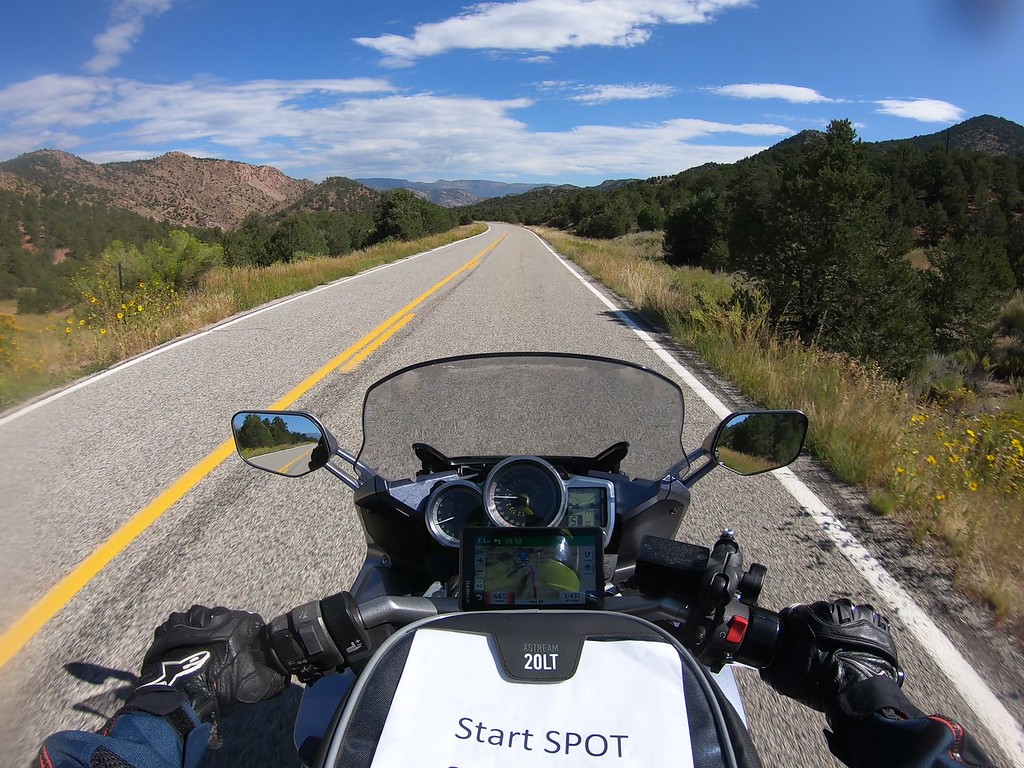 Riding on US50 usually means at least some of this.

But getting stopped near the front of the group means you can usually dispatch that slower truck and trailer and have the road to yourself. 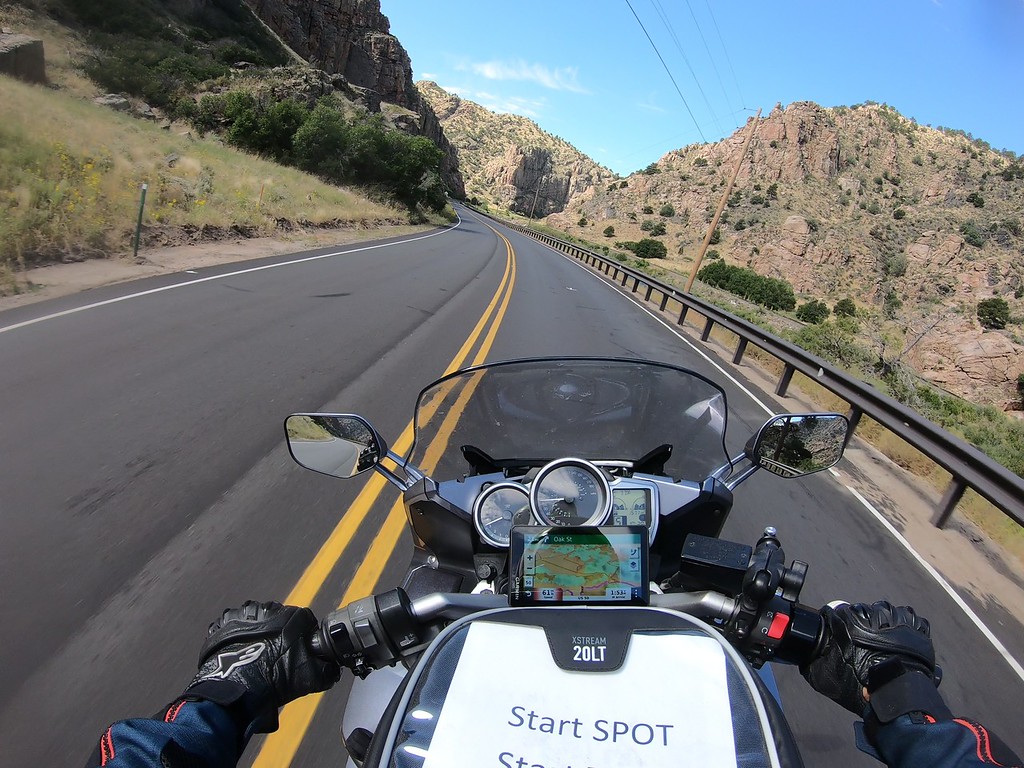 As I progressed north through the state, weather started to become a bit of a concern. 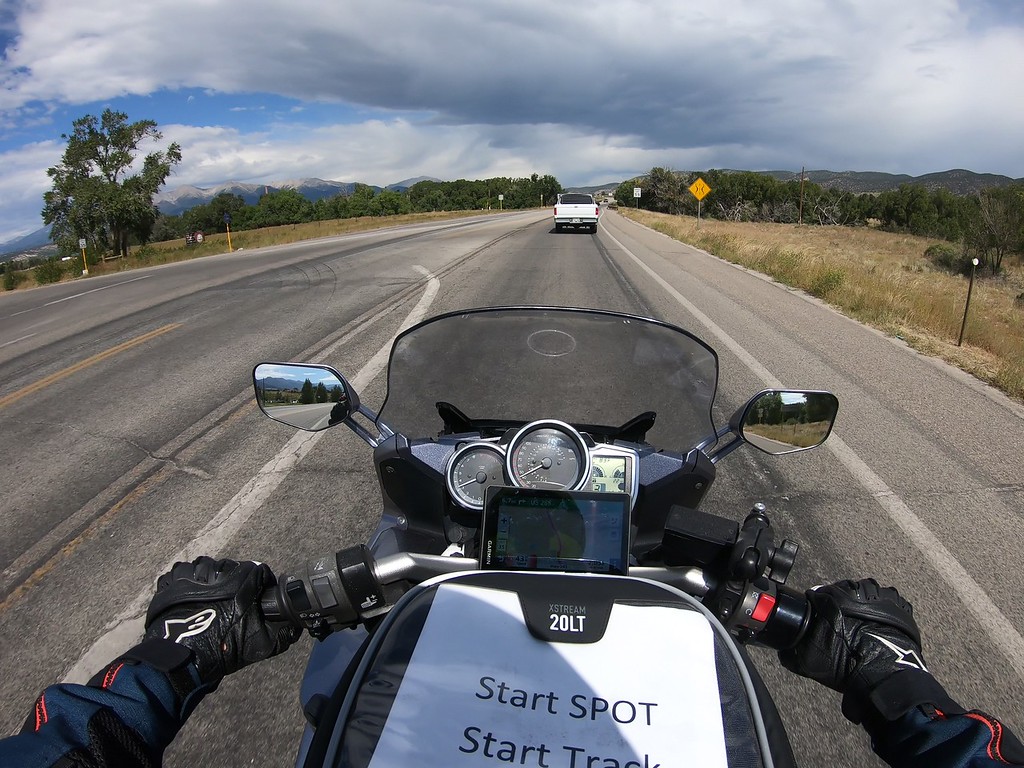 So, Julie (FJRFarrier on FJRiders) has long praised the Cuban Sandwiches at Buchi Cafe Cubano in Leadville Colorado as being particularly amazing. I, having grown up in Tampa Florida, know a thing or two about Cuban sandwiches. I know, that outside of Florida, most restaurants just use a regular Deli pork and call it a Cuban. There is so much wrong about that. Now, of course, I'm skeptical when Julie, from Ohio, says a restaurant in Colorado, has the best Cuban sandwiches. I put it in my GPS to check out. 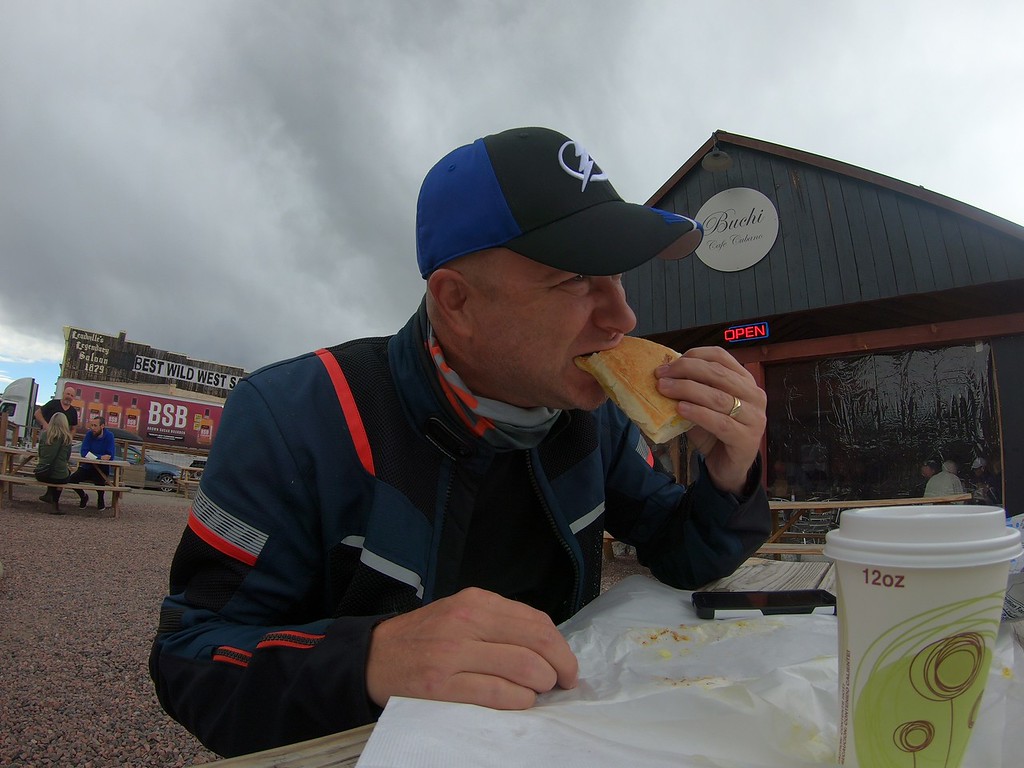 Ok, so Julie got lucky on her first Cuban sandwich because that was a proper Cuban and it was definitely good. Their Café con Leche was pretty good too. It definitely hit the spot and I enjoyed every bit of that lunch.

While eating lunch I started contemplating the weather. I could go back a little bit and take Independence Pass through Aspen and into Glenwood Springs. However, looking that direction was low level clouds and a lot of rain. Looking at the weather radar confirmed that. I didn't really want to deal with that and I've been over Independence Pass before.

Looking at going north to Interstate 70 and across to Glenwood Springs also showed rain. In addition, there were recently mud slides in Glenwood Canyon on I-70 that had caused various road closures. It's currently back open but only one late each direction causing some traffic and potential closures during the rain like I was seeing on the radar. I decided to tempt fate and head north to I-70.

Before taking off though, I noticed a bicycle store a half block down from the Cuban restaurant. I'd discovered my aging camelbak bladder was leaking and kind of nasty. I popped down and picked up a new one, then put on my rain gear and headed north. 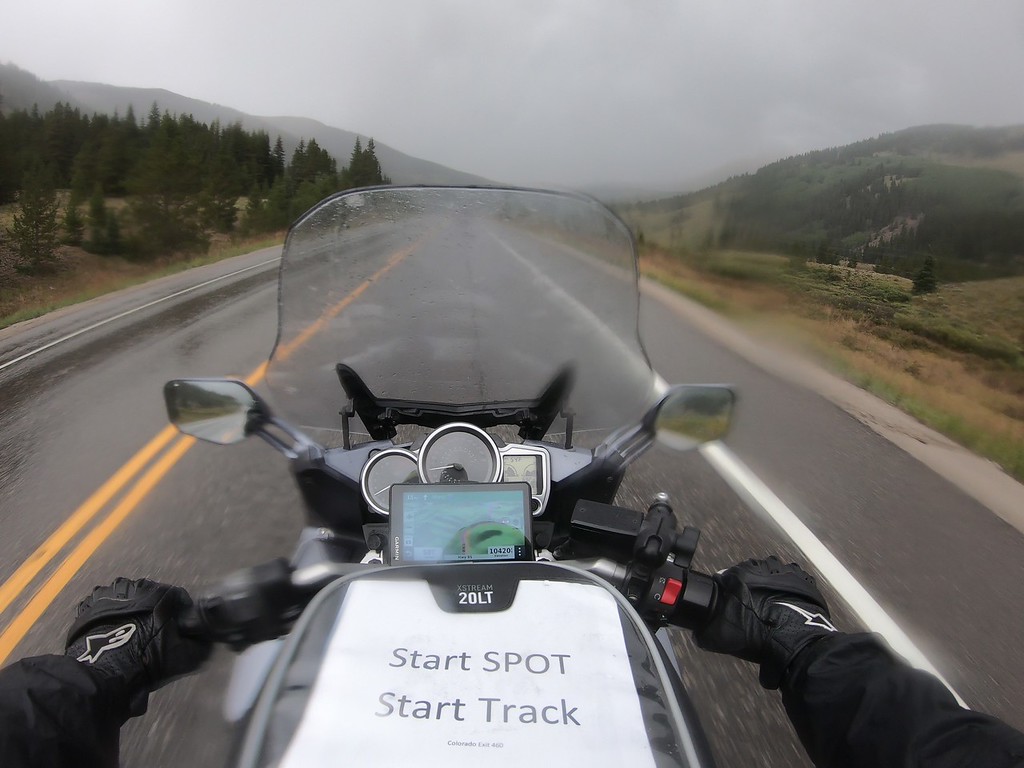 Running I-70 is about as close as you can get to driving in a Nascar road course race. For the most part, the speed limit isn't even considered a suggestion, and the fast moving traffic is pretty insane. I had a car following along behind me at one point and I was approaching a steep downhill section of I70 and moved left to pass a semi truck. Right as I came alongside his trailer wheels there was a slow moving car ahead in the right lane. The semi truck jerked left to pass the slow moving truck not leaving me in a good situation. I was braking hard downhill on soaking wet pavement headed for a narrow shoulder next to a guardrail. That car following me was about to get an up close front row view of a motorcyclist getting squished. Thankfully the truck saw me at the last second, hit the brakes and moved back into his lane. I zipped by and thanked my lucky stars.

The cleanup crew around the mudslide area has been working hard, and I zipped right through without any traffic or issues. There was one section where you could see that the left lane sure did get torn up from the slide though, and will require some work to get that all fixed. 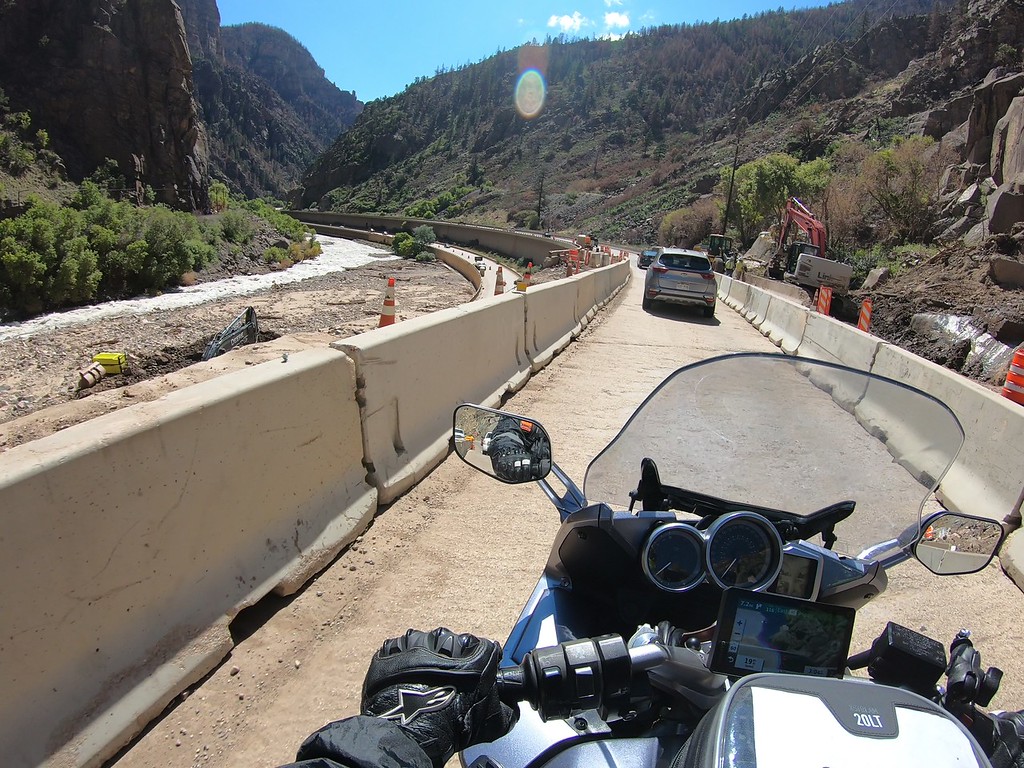 Shortly afterwards I was exiting into Glenwood Springs and headed for the Caravan Inn where NAFO was being held. I arrived and was promptly greeted by some folks I've talked to forever online but was never able to put a face with the name until this day. Good times were had, lies were told, and general BSing took place in that parking lot.

Dinner was next door at the 19th street diner one block over from the hotel.

This was one of the few meals I didn't take a picture of, but it was good and the service was fantastic. My son loves to see what I eat on my trips so if I have the photos. I'll post them.

Posted by GixxerJasen at 1:55 PM