Off the bike day.

I'd planned an entire day just hanging out at the Grand Canyon, doing things, relaxing, a little hiking and I got it all done. I started up by waking up early so I could ride over to the lodge parking lot and hike out to Bright Angel Point to watch the sun rise.

What a nice little half mile hike, but wow, there were already lots of folks out there to watch the sun rise too, many with some serious camera gear. I found me a nice vantage point on some rocks and got set up to watch the show. Didn't take too long and the sun was peeking over the edge of the canyon. 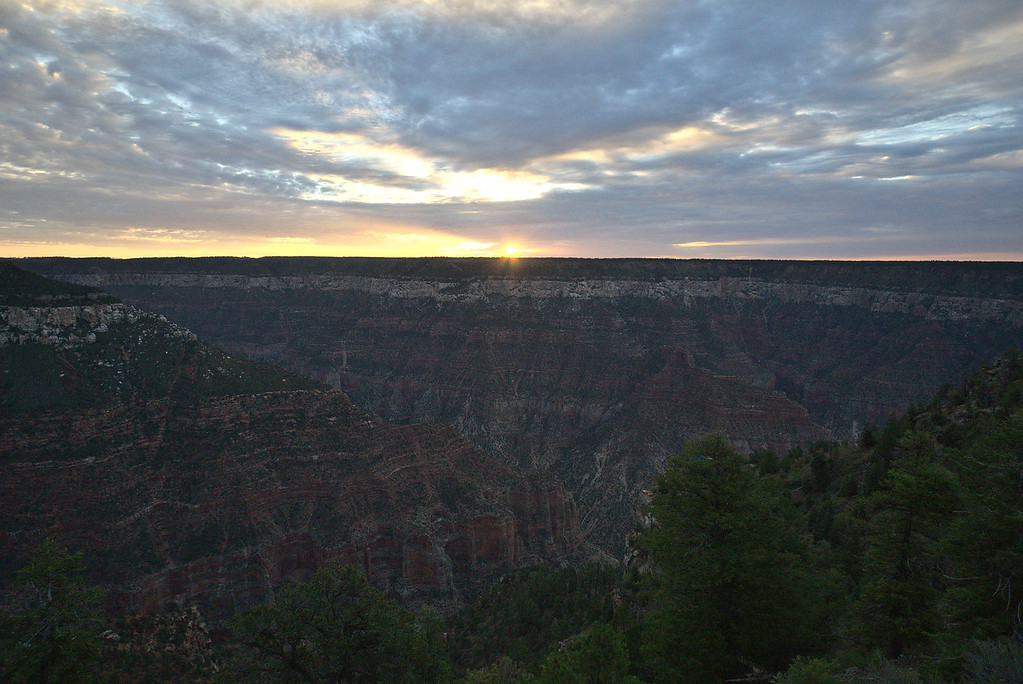 And then a few minutes later, the show was over. Boo!

So I set about to wait and see what I could make of my morning. I wanted a good shot with the early morning sun at the right angle to light up the canyon but it looked like I'd have to wait. So I pulled my stuff out of my camelbak and made some coffee. No finer place to sit and sip a cup o' joe.

Occasionally the sun would peek through a hole in the clouds and light up certain areas. Here it is lighting up some folks sitting on the rocks there. The ledge to the left of them was my coffee spot. I moved around a bit trying to find better places to take photos from.

This is what it looks like viewing out to Bright Angel Point. 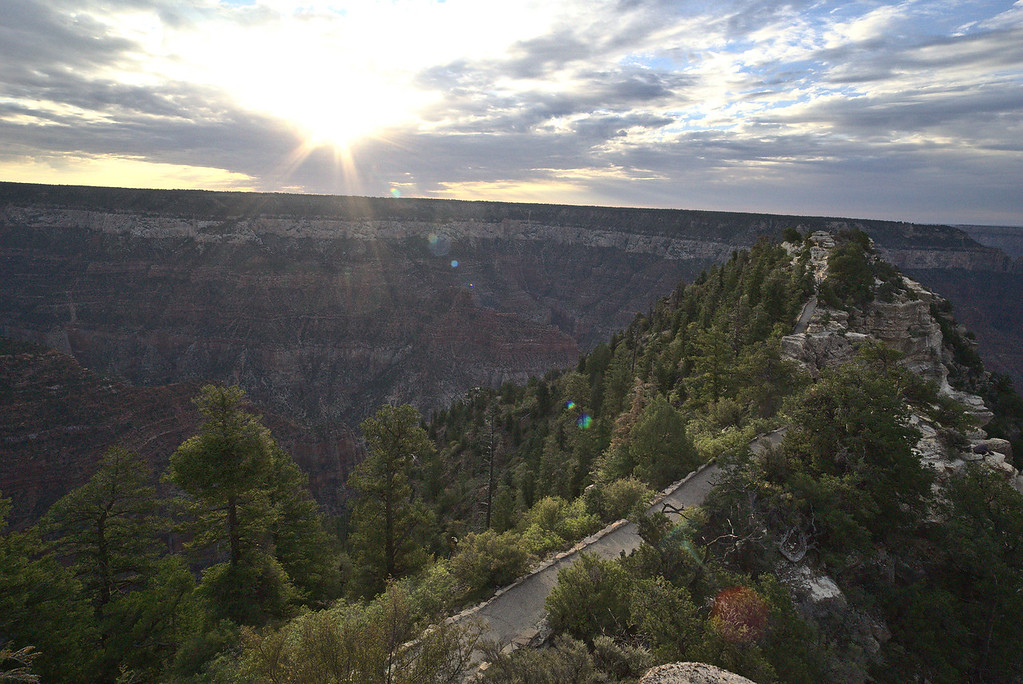 I spent the morning looking at the skies a lot and getting this in return.

Eventually the guy in this photo moved and that became my spot for the rest of the morning.

This is the rock I sat on from the other side, right by the end of Bright Angel Point Trail.

And this is looking down from my rock on Bright Angel Point.

I sat for about three hours there. Everybody left right after sunrise so I had the place to myself. It was super quiet and the temperature was perfect, so I got to sit and be introspective staring at one of the most beautiful locations on our planet. In the process I snapped around a hundred photos hoping each time that the clouds might open up a little more, but it takes a big hole in the clouds to illuminate an area as vast as the Grand Canyon. In the end I had to settle for the best I could get, which isn't bad. And even better than the photo was the experience I had sitting there that morning.

Eventually I returned to my camp site and started thinking about lunch. I'd brought a bunch of the Mountain House dehydrated meals to eat while I'm camping as they pack small, but cook easily. I had let my wife and son pick them out and my son was very excited to hear my thoughts on the "Creamy Macaroni & Cheese." I sent him this photo which pretty much sums up my thoughts. 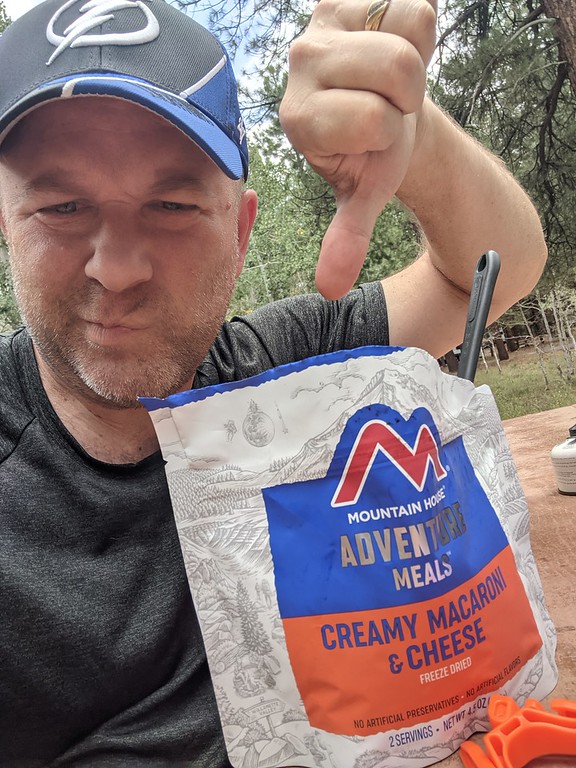 I think they called for too much water because it was very runny. Then the cheese powder didn't dissolve very well, so it made for kind of a nasty sauce. But, beggers can't be choosers and I was starving so I ate the whole thing.

Then I walked about a hundred yards over to the edge of the campground and marveled at what I can see so close. 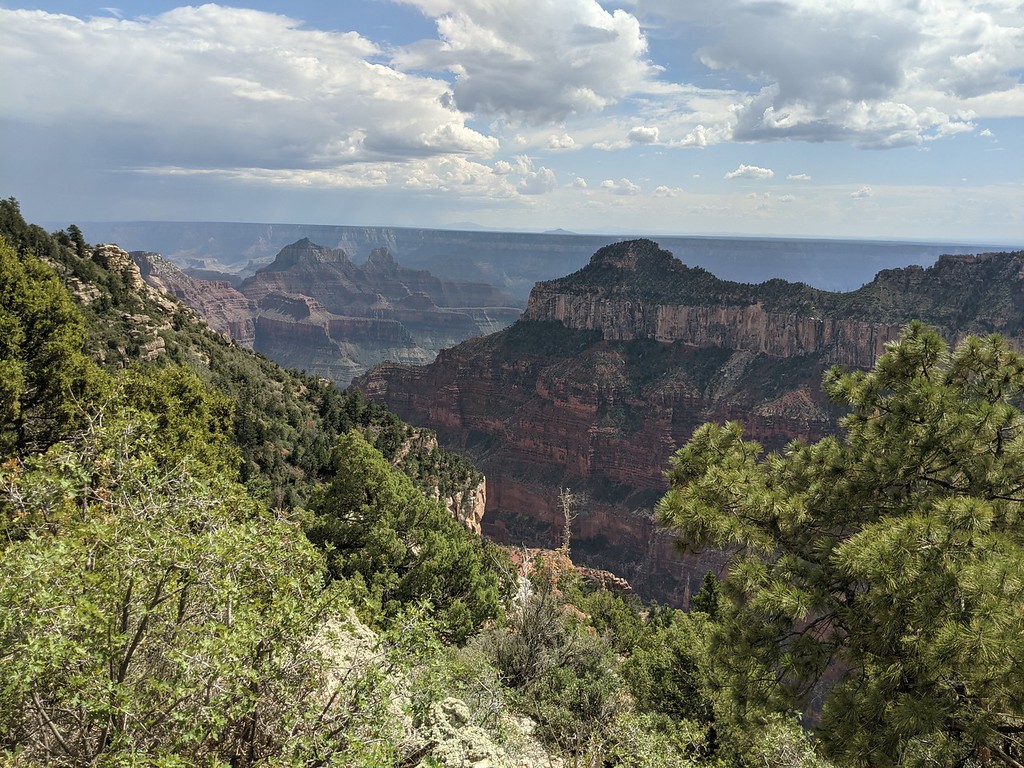 After that I grabbed my camelbak and set out for an afternoon hike. I picked up the Transept Trail where it comes around the campground and followed that to Bridle Trail, which leads to the North Kaibab Trail. You can take this one all the way down into the canyon. The important thing to remember is that every bit you go down, you have to come back up. I was not about to hike down to the bottom of the canyon. First of all, it's too late in the day, second, I'm having to keep an eye on my Achilles tendon that keeps flaring back up from tendinitis, and the altitude is 8.300'. I've decided to hike down to the Coconino Overlook, and no further. Well, it was further than I thought it'd be. Also, the North Kaibab Trail is the one they'll take you down on mules. This meant I had to dodge fly covered piles of pee and poo all the way down the trail. Not ideal. But the view is still worth it. 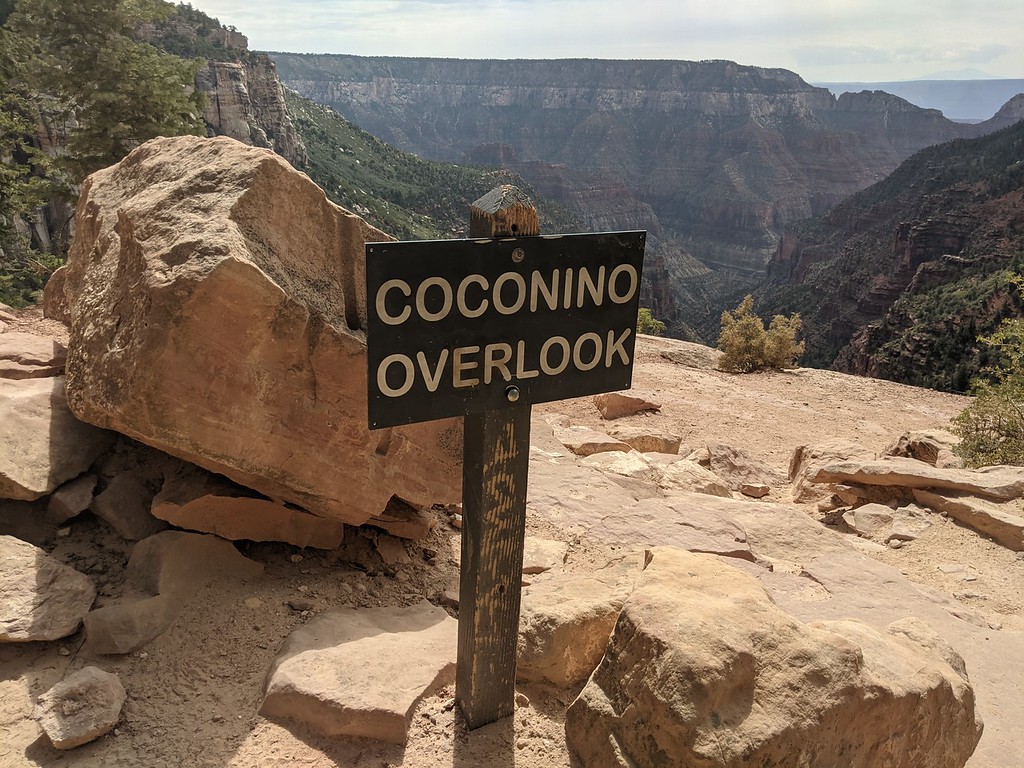 After that I hiked back up and back to my camping spot. One thing about being at this altitude, if you are in the shade, the weather is absolutely amazing. But if you are out in the high altitude sun it feels like your skin is sizzling.

My picnic table and the rest of the site were in full sun, but the empty site next to me was in full shade. Thus, I spent my afternoon sitting at the neighbors picnic table finishing off the last 2/3 of a book that I've been nursing for quite some time. Such a nice very relaxing afternoon.

Then it was time for dinner. My wife and son voted and chose the Lasagna with Meat Sauce. This is supposed to be my "Not bad" face but my wife says I look terrified. 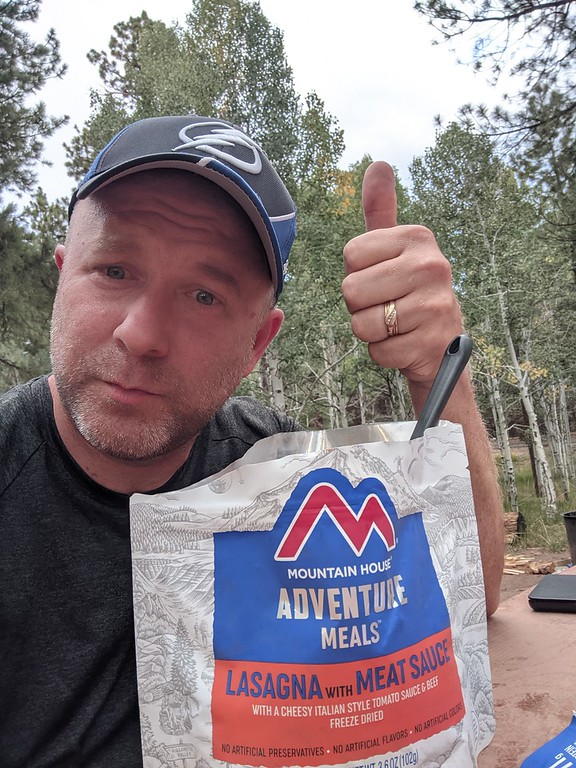 Still too much water but the sauce powder dissolved and it turned into a slightly better than chef boyardee quality lasagna. Not bad actually.

As the night drew to a close, I finished off all of my fire stuff in one fell swoop and had a nice last campfire of the trip. 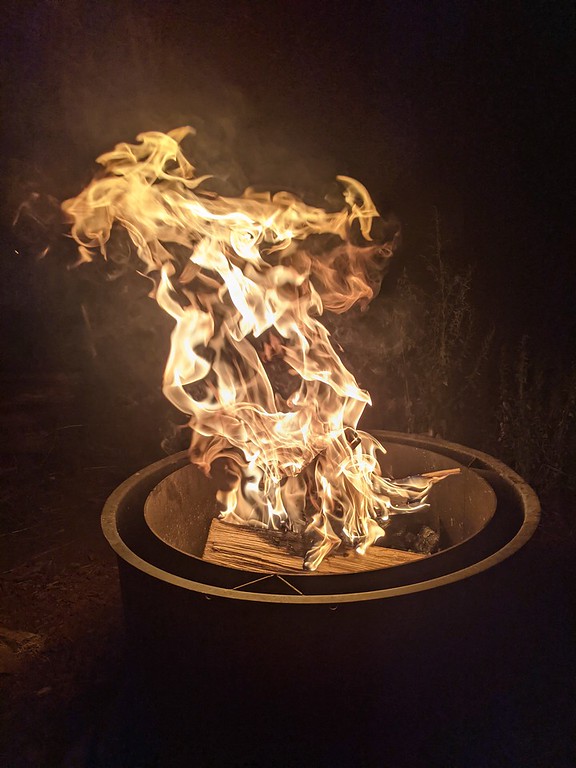 Also, showers are still closed. At this point I can barely stand being in the tent with myself. Seriously, who thought this was a good idea?