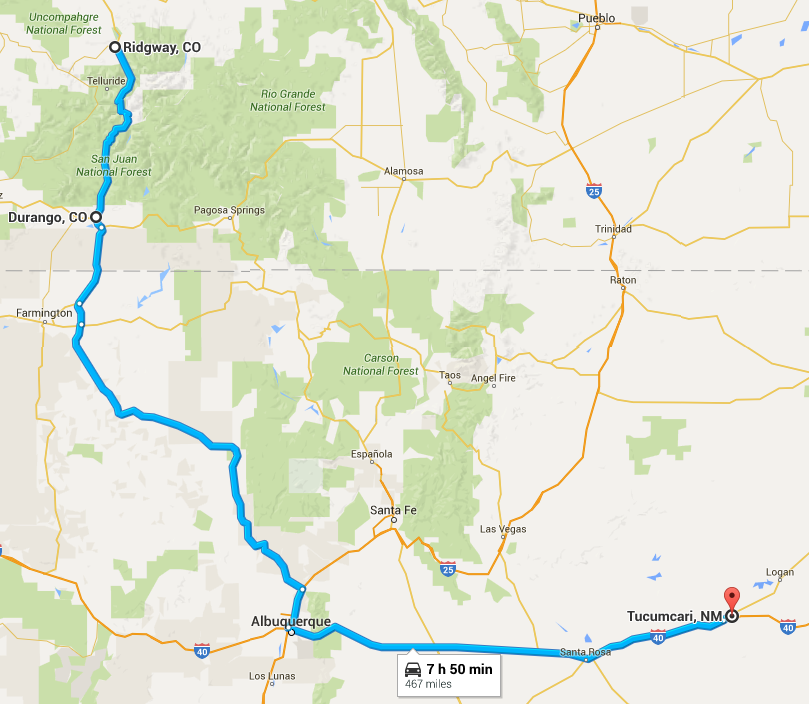 So, cutting back my aggressive ride schedules was a good idea. I'm feeling good this morning and I know I need to make some route modifications today. I need to cut about two hours of saddle time off of my 9H 35M route (not counting stops) today. Add onto that, I'll have to plan ahead because I will be staying right near the time zone line so I lose an hour almost as soon as I get on the road in the morning. This will mean an early departure from the mountains but will be worth it in the long run.

It's Saturday morning and I've heard tales about the traffic through Taos, which will be made worse by amazing weather on a beautiful Saturday. I'd rather not sit around in traffic. Going through a major city such as Albuquerque would usually be avoided but traffic shouldn't be so bad on a Saturday afternoon. This will allow me to do a little sight seeing I have had on the back burner.

As I'm getting my stuff ready to go, I hear some noise coming from the kitchen. That woman has gotten up early after all! I stroll out and coffee is brewing and she's fussing in the kitchen. When she sees me coming she asks "Are you sure I can't fix you an English muffin or a bagel or something?" I relent and agree to an English muffin to which she replies "I knew I could get you to be reasonable." To which I reply in banter "Well, one of us has to be reasonable, right?" She laughs and soon I'm eating my breakfast and taking down some much needed coffee. While I was eating a couple other guests came out and started consuming coffee and chatting.

Bike loaded, electric gear hooked up, I headed out. 550 south out of Ouray is the "Million Dollar Highway" and what a stunning finish to my time in the mountains it was. The sun was peeking over the mountain tops and lighting everything up including the Aspen trees to give me a big finale. I had to keep the temperatures in mind during this ride, because even though I was snug and warm in my Gerbings heated gear, the ambient temperature was in the thirties. I kept reminding myself that as amazing as the smooth pavement was through these fantastic curves, cold tires and cold roads don't provide the most ideal traction scenario, and up on these roads the penalty for failure is very high. I managed to keep the pace in check and still have a good time.

Only a little bit of construction on this road today, which was fortunate. During the week they have full closures for several hours in the morning and in the afternoon, but today it's wide open. Well, not so wide really. There were a few spots closed down to one lane being worked by mobile traffic lights in place of a flag man. One of these spots, the open lane was the one closest to the edge and due to the closure the lane was pretty narrow, with no shoulder or guardrail to speak of. It felt very narrow to me on my motorcycle but I'm sure it felt much more narrow to the Jeep Wrangler Unlimited ahead of me. I noticed this Jeep while sitting at the traffic light. White with Texas plates, a cargo shelf on the back loaded with three coolers. He was keeping a pretty good pace in the mountains after the construction, but not good enough and he was dispatched at the next passing zone. Funny thing, I'd later pass him again on 40 headed east toward Texas. 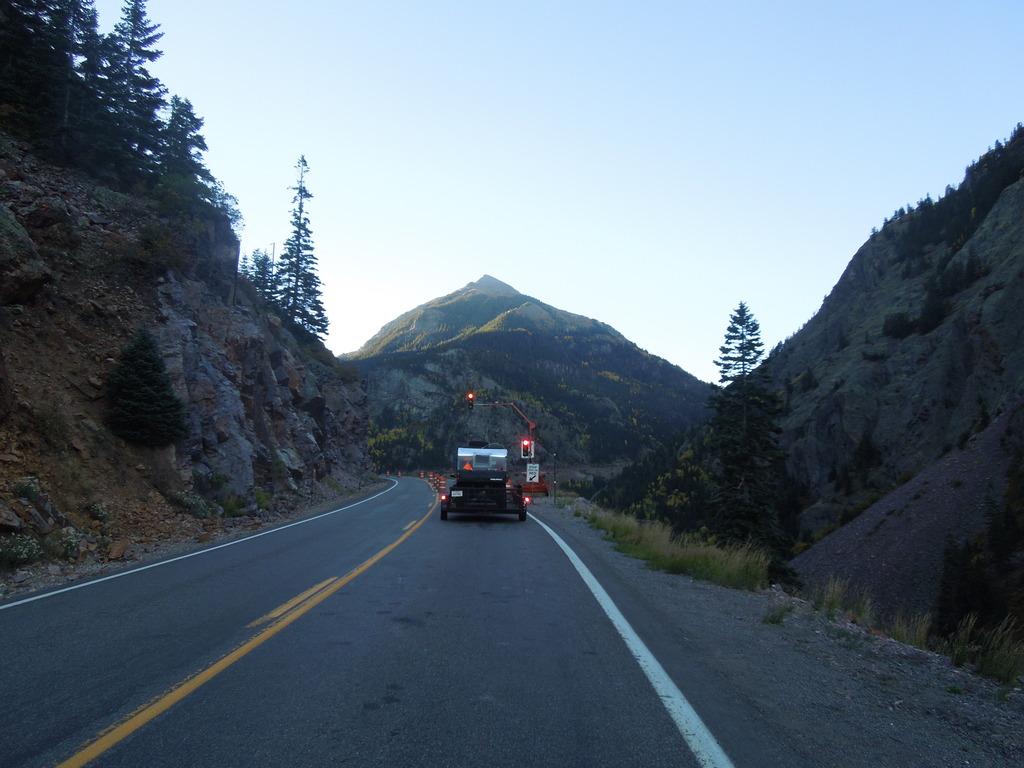 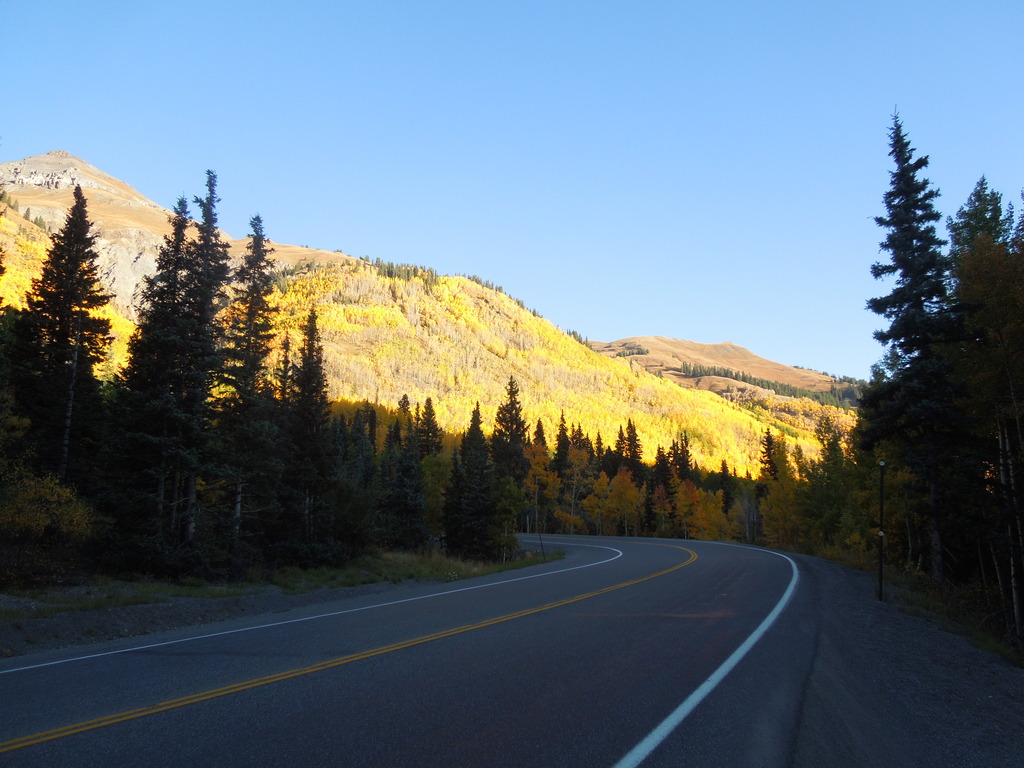 The valley that Silverton sits in was beautiful in the morning sun. I came to see the Aspens turning
and have certainly had my fill. While I've become used to them by now, I'm by no means tired of them and I know soon I won't see them anymore. I stop to take in the view and snap my last photos of the golden trees before continuing south. 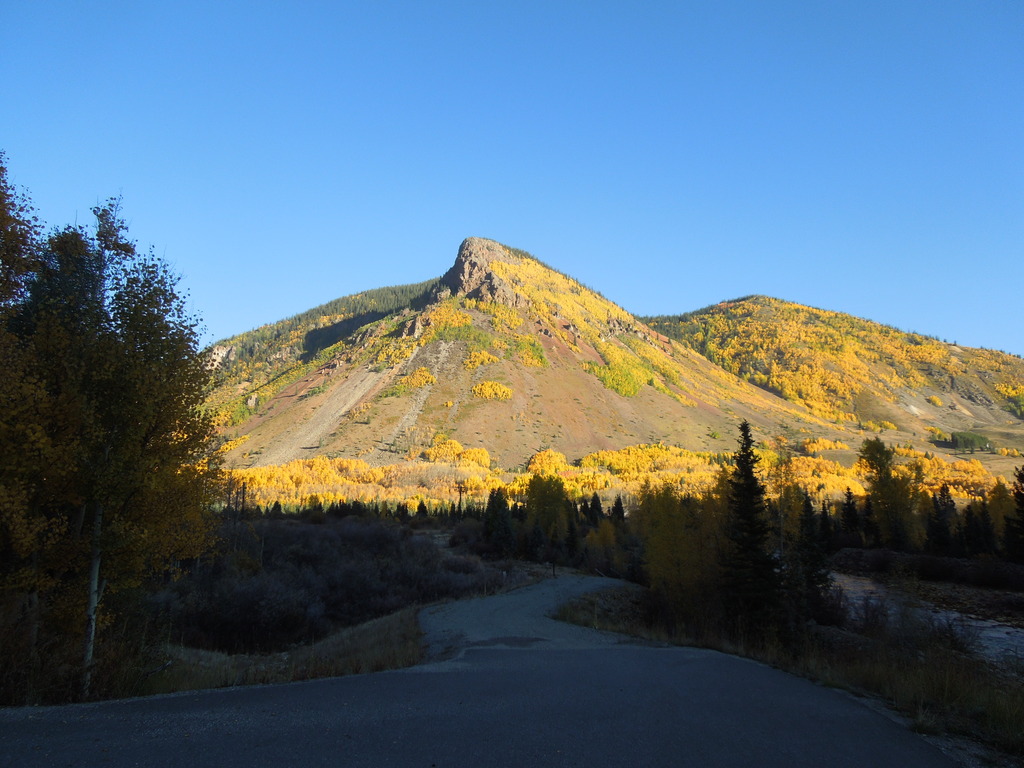 I stop in Durango for gas, a snack, and some hydration. I haven't been doing a particularly good job of staying hydrated and I know going into the desert I need to be more careful. I load up on a couple of bottles of Gatorade and consume a fair amount during my break. I look over my roue and agree to cancel the ride through Taos and tell my GPS to go to Tucumcari by the fastest available route. This means 550 south through Albuquerque, so I mount up and head out.

Very soon I see the "Welcome to New Mexico" sign and I whip around looking back and spot my opportunity to snag the Colorado sign I'd not been able to get several days earlier. Woohoo, another added to the collection.

Altogether too soon the mountains are far behind me and I'm cruising through desert that is flat as a pancake with nothing but scrub as far as the eye can see. It's depressing with no mountains and Aspens in my view anymore and while many love the beauty of the desert, I long for the mountains.

As I make my way south the desert does get more interesting with mesa's and canyon features, but I've got plans for lunch in Albuquerque. After several days in the mountains I have to shift gears mentally to deal with the craziness of fast moving city traffic, like I deal with daily back in Dallas. I get it and make my way to my lunch destination and my first of two sightseeing stops.

It might not look like much, but I'm a huge fan of the TV series "Breaking Bad" and this was the restaurant where a lot of episodes were filmed and played heavily into the plot for two seasons. The paint and name were different but it's definitely the same place. I'd gotten the idea from a ride report I'd seen several years ago, before I saw the series, and it didn't make sense then but it was amazing to be sitting there and seeing the place this time. 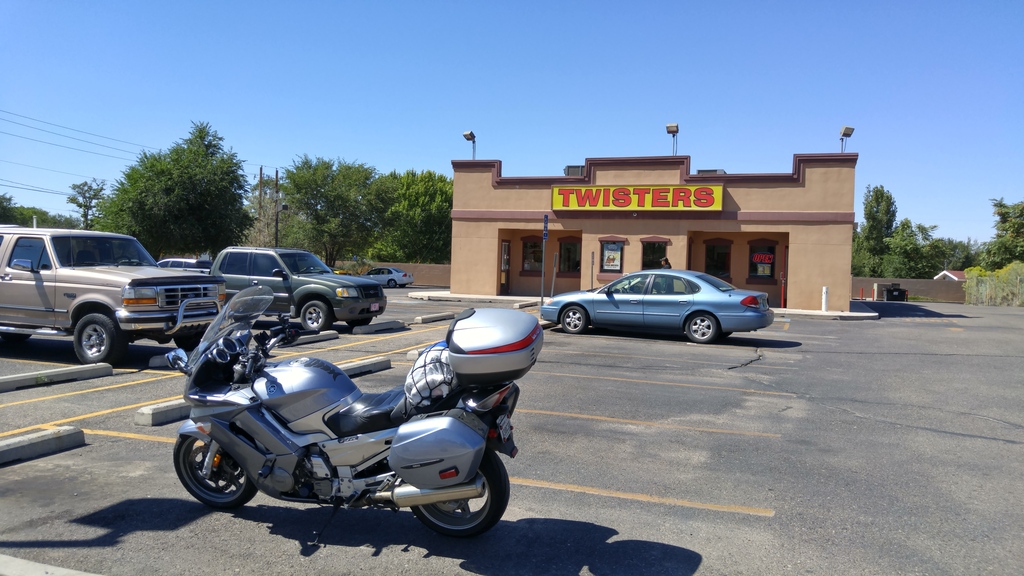 After enjoying my soup the previous night I opted for the "New Mexico Chicken Sandwich" which is really just an ordinary chicken sandwich with green chilies on it. I was surprised in that the chicken breast was large, tender and juicy and all the toppings were very fresh, including a very good looking crisp tomato that I put to the side since I don't like tomatoes, but can judge and appreciate the freshness of them. The sandwich was delicious with the chilies on it and would be something I'd order again. The fries were kind of crispy and I liked that while they were hot but once they cooled down they weren't all that great. 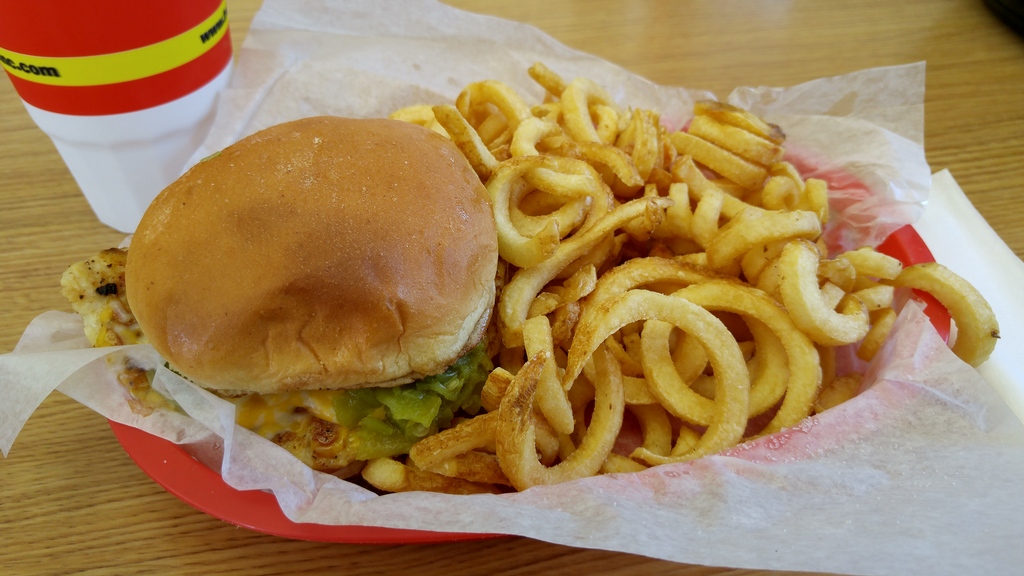 I took a few more tourist photos and was on my way.

This car wash also played a major role in the show and was featured from the very first episode through the last season. I snapped my photo and was on my way. I had a little fun on Facebook posting the photos and letting folks figure them out, as their appearance is somewhat different from how they appeared on TV. Both my sister and wife freaked out when they saw them as they are also huge fans.

Albuquerque to Tucumcari via I40. Not much to say and not much to see. It passed quickly and I exited on 54 to head to my final motel stay of the trip. 54 and buisness 40 is a very sad road to drive as it's a part of the old Route 66, and there's shell after shell of old Route 66 businesses that have closed up, are rotting, falling in on themselves, or been burned out. It's sad to see the old thriving town that you can tell was a happening place in it's heyday dying like this, but such is progress and change. Thankfully there's some places that have been snagged up by owners willing to invest money into renovations and then into running a successful friendly nice business here. My destination for the night at the Blue Swallow Motel was one of these.

Looking at google maps street view you can see what this place used to look like, even with boarded up windows to the office, and the difference is night and day. The motel is quaint, nicely decorated, beautiful neon, and a blast from the past including rotary dial phones in the rooms. The husband and wife proprietors were as friendly and helpful as could be and this place will definitely be on the list for any future trips through the area, thanks to my friend Andrew for recommending it. I ended up next door to a BMW rider who was headed to home in the west after spending a couple of weeks riding around the mountains in the east.

Dinner was recommended down the street at Del's Restaurant with a suggestion toward the salad bar and the two homemade soups of the day. I walked down not too hungry with the idea of soup and salad as my dinner, however my mind was changed upon arrival. Nice little restaurant, and the salad bar was decent, but the soups were "Cream of Cauliflower" and "Pinto Beans." Um, no thanks. I opted for the pot roast with mashed potatoes and a salad from the salad bar. Good meal and full tummy I headed back to the motel. 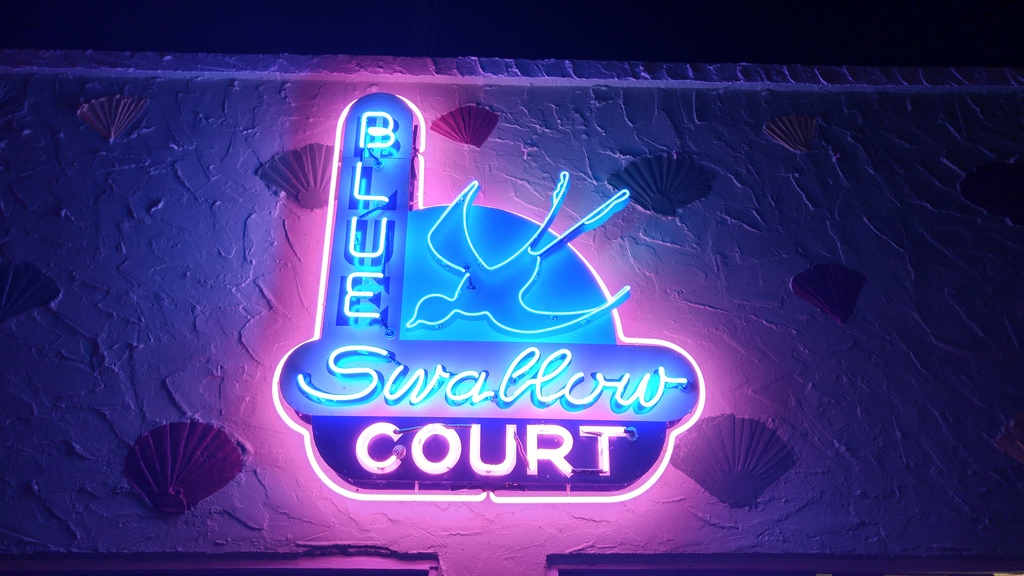 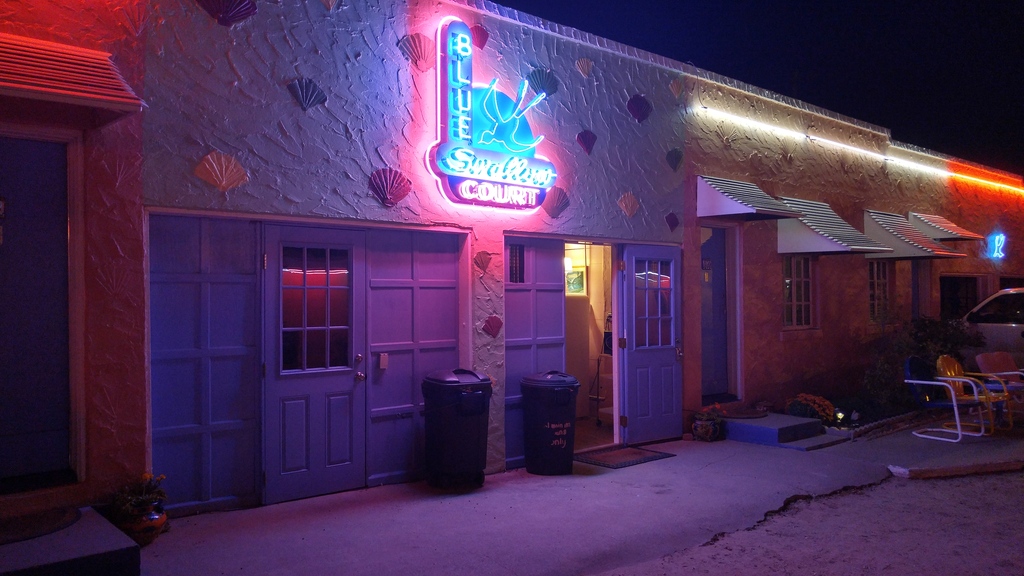 While I was prepping my stuff for my final ride home, I was in for quite a treat. The motel had a lot of rooms with garages that had all been rented by folks attending a local car show. I heard the cars coming back and stepped outside and into classic Route 66. The motel, the neon and now all the classic cars from the Route 66 era was amazing. The folks next to me were pulling their huge trophy out of the beautiful car and we talked for a short bit. I didn't get pictures as I already had all of that packed up, and I was offered to grab a beer and sit and talk, but had to decline as I was headed off to bed. I have a very early morning ahead of me.