I woke up and began quietly fiddling around getting my things ready to go trying not to disturb the other occupants of the house, but soon I heard the noises of a mom hustling a child around the house getting them ready for school, so I came out to see what all was going on. As Cathy ushered her daughter out the door to walk her to school, with their dog following along I noticed her kid was wearing shorts headed out the door. I too wearing shorts stepped out onto the patio and immediately remembered that it's in the thirties outside and had to run back inside. Mountain kids, I swear...can wear shorts outside whenever they want.

I warmed myself back up with a cup of coffee and Cathy came back and made me and Joel a batch of homemade waffles. Sitting there sipping coffee and eating breakfast watching the sun come up and light up the mountains, this is gonna be a good day.

Cathy and Joel head into town to drop the dog off at the dog sitters and they are loaning their truck to a friend for the day. Before too long they come riding back to the house on Joel's bike.

After getting the bikes loaded up, and everyone suited up we head out to Gunnison to do some errands and fill up with some ethanol free fuel. We shove off from Gunny at about 11AM.

Soon enough we are cruising along next to the Blue Mesa Reservoir and it's a beautiful day with temperatures now up in the comfy sixties and the sun shining on us. The last time I was here I always got stuck behind a slow moving vehicle for the 45mph curves going through the reservoir area, but this time I looked ahead and the only slow moving vehicle in front of me was the Harley. I zoomed ahead and ate up those curves eventually pulling off to wait for Joel.

We continued on and made the turn onto 92 into the Black canyon. I pulled back into the lead so I could zip through the twisties and putter along on the straights waiting on Joel and Cathy to catch up. I'd been giving Joel a bunch of crap about getting rid of his beautiful Anniversary Edition Honda VFR Interceptor and buying this Harley, and after the canyon Joel admitted "Yea, back there in the canyon, I was actually missing my old bike." Ha! Got him to admit it. 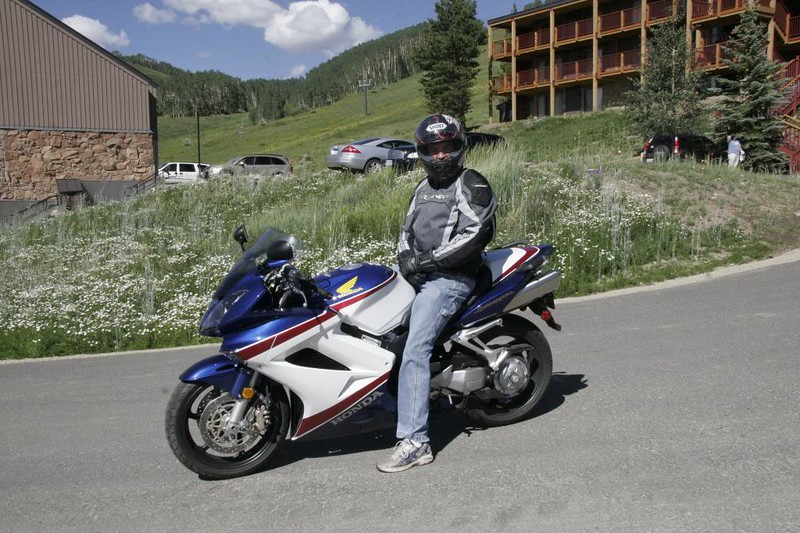 We stopped off in Delta for a little break to get some hydration as it was really warming up now. I needed a little snack and a snickers ice cream bar seemed like a good treat. Soon though the twisties were behind us and we were slabbing down 50 toward Montrose. A stop off at the "Colorado Boy Pizzaria" was in the plans for a late afternoon snack since none of us had any lunch. We split a small delicious pizza that was very reasonably priced and were back on the road.

Cathy and Joel, my hosts and current tour guides. 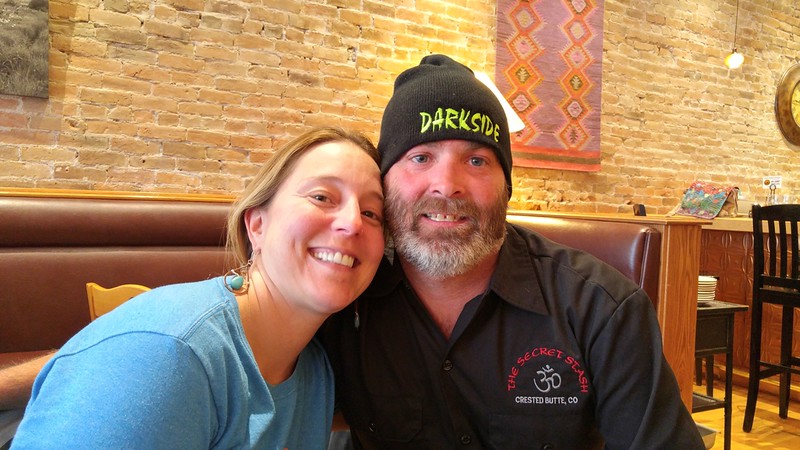 Joel and I...posing because Cathy forced us to.

Once out of Montrose I was happy to be moving because it was pretty hot when sitting at the stop lights as the temperature was now up to 88F. Crazy temperature as that's hotter than I saw coming across Texas.

I must have blinked and missed Dallas Colorado, but soon we were in the beautiful ride from Ridgway to Ouray, a little less slabby and more of the mountains while gaining elevation again.

I had a reservation at the "Secret Garden Bed and Breakfast" but Joel and Cathy were at a hotel down the street. They got the last room, a family suite, for the price of a regular room. We went our separate ways with plans to meet somewhere on main street for drinks and then food. Myself and the elderly proprietor got into a small "Argument/Negotiation." She informed me that breakfast would be at 8:30 but I let her know I'd be shoving off at sunrise, about 6:30-7AM. She asked if she could come up and make me an English muffin or some breakfast but I assured her that I didn't want any special treatment and would be just fine. Negotiations finally settled on her agreeing to set up the coffee pot so all I had to do was push the button. I got myself settled in to my room, and then went for a much needed shower. This was somewhat by design as other folks were starting to show up at the B&B and the bathroom is shared, so I wanted to get this in and done quick and early. I laid down and chatted with my wife and son before heading off to meet Joel and Cathy. 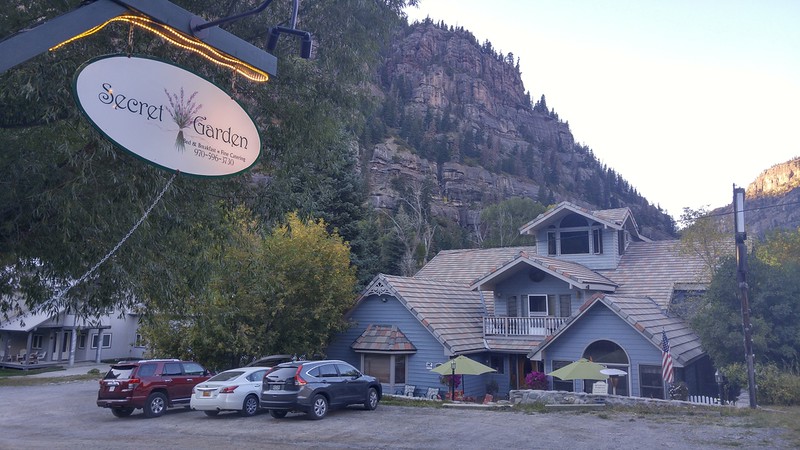 We met up at O'Brien's Pub and Grill where they were finishing up their drinks and what apparently were three tasty but too small chicken strips for an appetizer. We moved out onto the patio to people watch and drink. Now, I've been to New Mexico and Colorado many times before but have yet to partake in the famous "New Mexico Green Chili" thing, but have been wanting to try it. O'Brien's had a soup of the day of "New Mexico green chili and chicken" so I ordered up a cup of that to give it a try. I was soon wishing I'd ordered a full bowl because it was delicious.

Once done there we headed down to the Outlaw Steak House and put our names on the list. The wait was an hour and a half so we walked down to Joel and Cathy's motel and spent some time relaxing in the motel hot tub. This was just what the painful muscle in my neck and shoulder needed. We were dressed and headed out the door when the Outlaw called Joel to let him know our table was ready.

Taking a picture of the moon over Ouray and the mountains two days before the big red moon event thing. 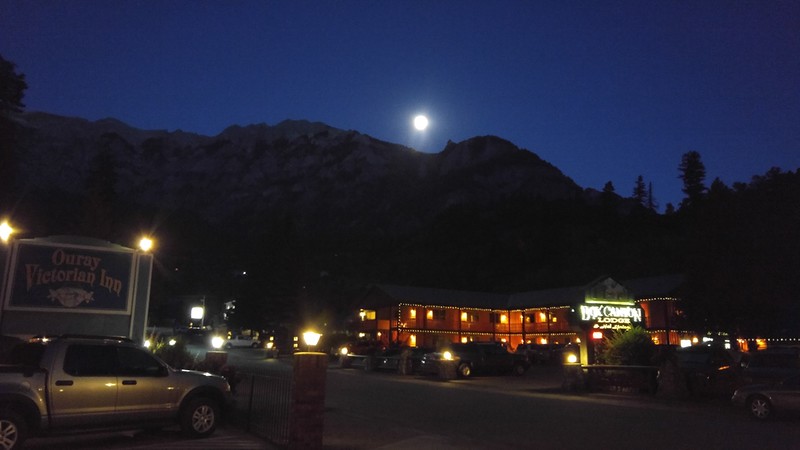 Dinner was great in a fantastic little restaurant there. I started off with a Spinach cheese and garlic soup. The soup was delicious but could have been a little hotter. Steak and baked potato were the main entree with a glass of wine and I was stuffed when it was all done. Outside we said our farewells and I headed off to bed for an early ride in the morning. I slept well with the windows open to let in the chilly air and the sounds of the Uncompahgre River bubbling by.