This is a quick trip that has been in the works for almost two years. I stumbled upon the Trinity Site purely by accident. Someone posted a picture up on a motorcycle forum and when I went to their album on photobucket there were pictures from their ride to the Trinity Site. I started reading and knew it was something I had to do.

For those uninitiated, the Trinity Site is where the first atomic bomb was detonated. They open the area including Ground Zero, and the McDonald Ranch House where the bomb core was assembled, to the public twice per year, first Saturday in April and the first Saturday in October. I got most of my info from this very informative website -> Atomic Tourist.

I had this trip on the calendar last year in April, but our big project of the year had to be rescheduled and got dropped into the week of Trinity so I rescheduled for October. Cash flow issues as well as some family stuff got in the way and October got scrubbed. So the plan was April 2013 now. Almost didn't happen though.
I'd been discussing a different ride with a member of the FJRForum and ended up mentioning my plans for Trinity. He has been and got all excited and wanted to go again and we started making plans to meet up and head out there. My original plan of riding out on Friday, seeing Trinity on Saturday and then riding back on Sunday turned into a four day adventure seeing the mountains of NM and exploring areas of Texas with some moto camping thrown in as well. In addition, he pointed out that if we could hit Socorro in time we could head out to see the VLA. I didn't even know this was in the area but definitely wanted to see it. I was freaking excited over the plans.

Well, turns out my riding partner suffered the same fate I did last year. Unavoidable issues at work landed on his calendar causing him to be unsure he'd be able to make it. I figured I'd shorten my plans a bit then and try to make it back into a 2-3 day deal. Then Sunday before the planned trip I wake up to my son puking in bed. I take a sick day on Monday and take him to the doctors where we end up taking five x-rays to determine he doesn't have pneumonia but is sick and so is his mom. Well, at least my plans for being radiated this week came true. Tuesday night when I went to bed my throat was the size of a softball and I felt horrible. No way I can make the trip now. I take another day off on Wednesday to go to see my Doctor. They hit me with two shots including a steroid shot and a bunch of antibiotics. I can't believe how much better I felt in a few hours.

Thursday comes and I'm still not sure. I've already taken two days off from work this week and stuff is piling up on me, but this day WAS on the calendar for a LONG time. I speak to my wife and she insists that I have to go. I figure I might travel light and hit up the googles and low and behold I find me a dirtbag motel for $45 a night in Socorro NM.

So that night, you'd think I'd have a hard time sleeping because of this but really my mind was running in a zillion other directions. Then came one more stumbling block. My phone goes off, got a failed drive in one of my SAN's at work. I'm on the phone with Dell for a while and get another drive on the way and send my boss specific instructions and off to bed I go. It's 1am now and I have to be up at 5!

5AM rolls around and my alarm goes off. My subconscious starts trying to talk me out of the trip because it wants more sleep. I fight through that and hop out of bed. I think to myself "I can't believe I'm really doing this!" By 5:30am I am rolling down my street off on the trip...finally!

I will say that anyone who plans a trip across West Texas and Estern New Mexico cannot complain about the putrid scenery or horrendous crosswinds. You planned the trip...you knew what to expect. I only bring this up because these two things are about all that defined the first part of my day. I do finally make it to Roswell NM, and am thoroughly disappointed. I do manage to get this picture though for the records.

Speaking to my wife, I find that her grandmother, yes, the incredible woman that I dedicated my SS1K run to by going to Tennessee to get her some BBQ from her childhood favorite restaurant, yea her...she fell and is in the hospital. Ugh, this is NOT good news. They also found a few other problems while she was in there too. At this point I'm too far to turn around now because I'm not sure I could even make the full return trip today anyway. Since I'm planning on being home tomorrow, I push on and ask my wife to keep me updated on her progress.

Well, things sure pick up on the ride after Roswell. MOUNTAINS! Woohoo! I'm grinning from ear to ear from this point forward because I can't believe I was in my bed this morning and now I'm riding in the mountains. Amazing! 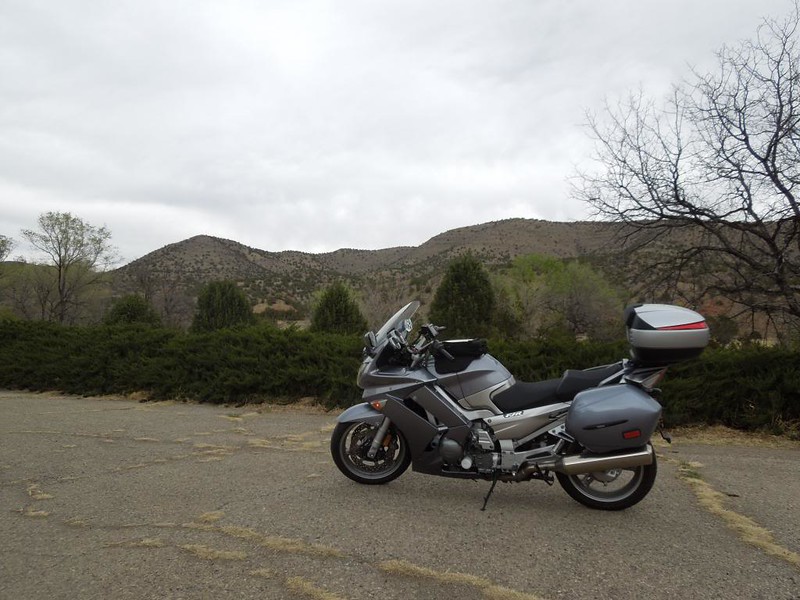 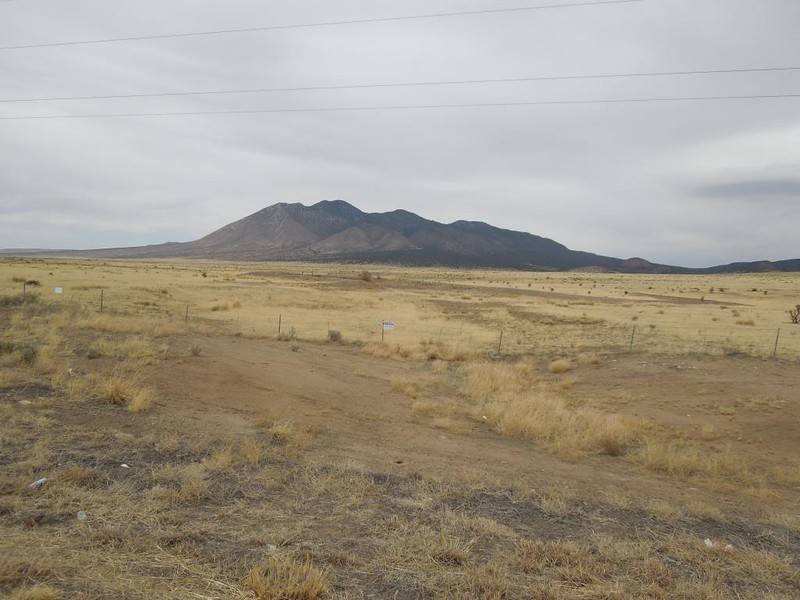 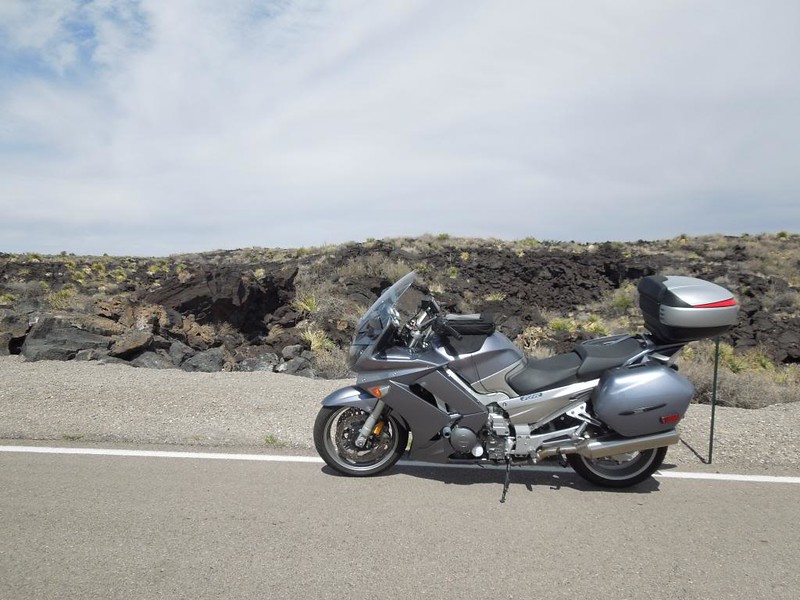 I finally to find the entrance to the Trinity Site so I can find it in the morning and continue on to Socorro where I turn towards the VLA. I've admittedly not read up enough but I know they are holding tours on Saturday which I won't be able to make. I just want to see the dang thing! I'm hoping I'll be able to get a good enough view from the road. I come over the rise and instead of having the dishes spread out over several kilometers like I heard they usually do, they've got them all clustered together! Excellent! Even better, there's a road going out toward them. I take the road and pull into a parking lot marked "VLA" and snag some pictures.

I'm quite good with the camera timer so I play around trying to get me in the shot too. 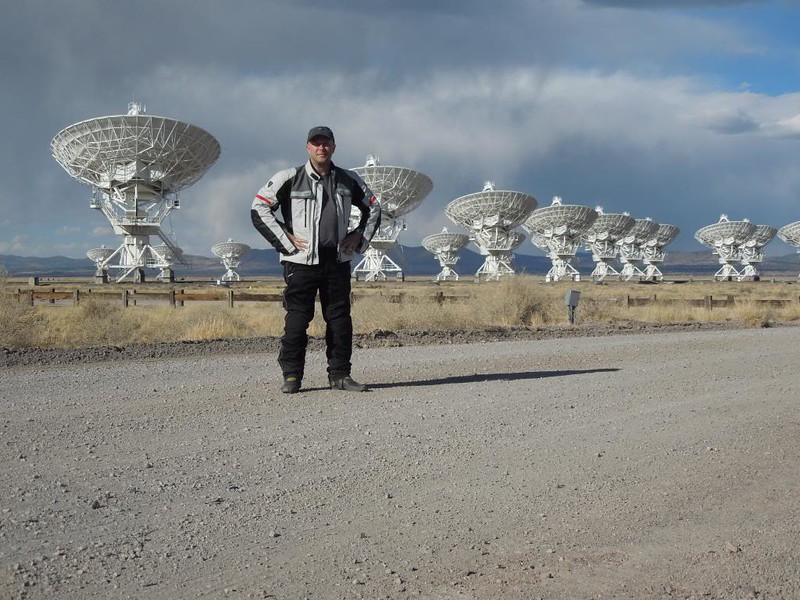 Well, I'm geeking out when I pull out of the parking lot and decide to go right and keep going down the road to see where it goes. Low and behold, there's the visitors center and it's open daily till sunset! Who operates on hours like that? I couldn't even hope for the USS Alabama to operate on those kinds of hours. I pull into the semi-full parking lot and go inside where I see directions for the self guided walking tour (with apology for missing placards as they upgrade them) so I start following signs. Holy crap, they let you walk right up to them!

I'm totally geeking out and taking pictures like a madman. I have to admit though, I'm not much of an astronomy guy. However, while I never finished my degree, there's an engineer lurking inside of me that was having a ball. Reading up on the precision of the construction, the cryogenic processes and then watching them all move in sync as they work together to track signals across the sky. I can't stop grinning at this. Then I go picture crazy. 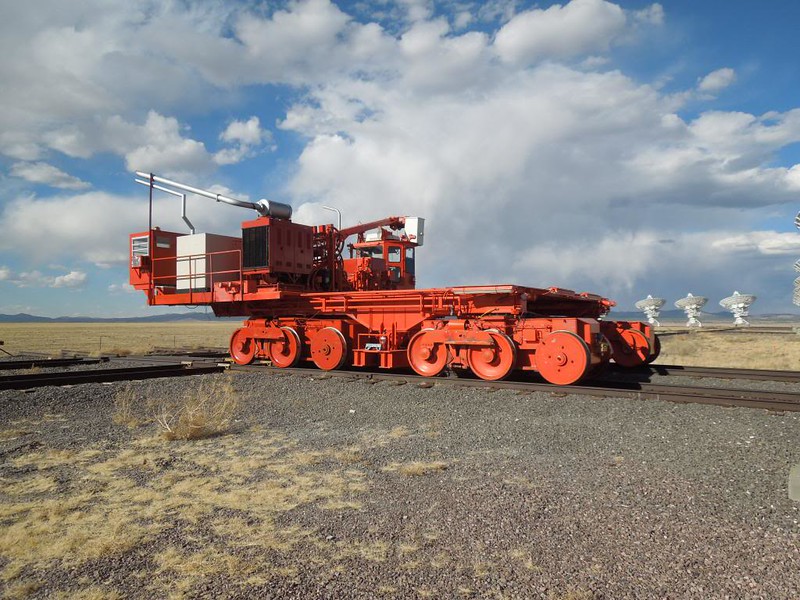 Finally I wind down and it's time to start heading back to town but I have one more stop to make. We'd planned on camping at a place called "The Box" recreation area. I couldn't find much info online except that it's free to camp, mostly used by rock climbers, and is between the VLA and Socorro. This means I should probably check it out since I'm here. I'm happy that this gives me the opportunity to take the FJR off the pavement for a bit of play. 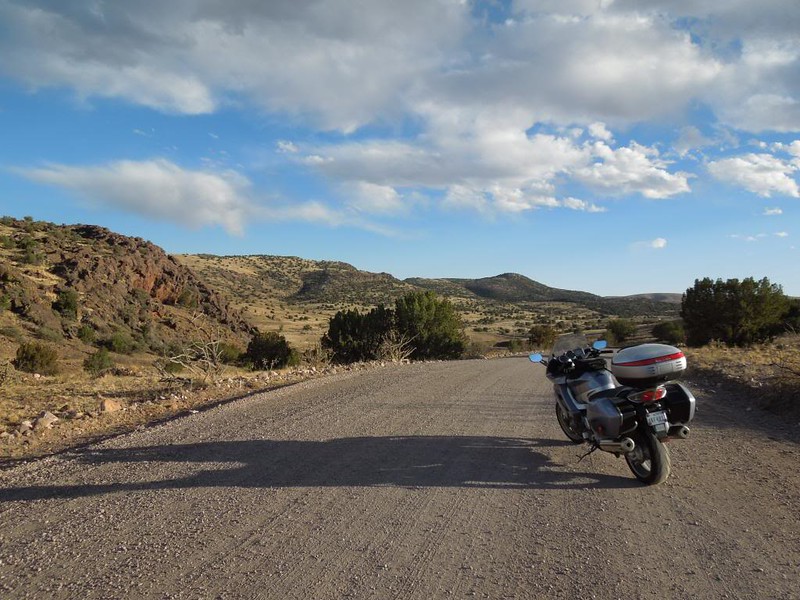 And this is as far as this rider and bike will be going. End of our road.

I get back and check into my hotel. It's not totally dirtbag, but it does feel like a $45 a night hotel. There's a BMW RT in the parking lot I note. While I'm pulling my bags off the bike and taking them inside the owner comes over and introduces himself. He's an advrider guy and headed to the Trinity in the morning. After a few quick words we have plans to head out together at 7:30 in the morning. Woohoo!

End Day 1. 799 miles. Temperature swing from 36F to 86F with sun partially obscured by clouds throughout the day.

Note: Click here for Day 2.
Posted by GixxerJasen at 9:00 PM