Today I'm running from one old Route 66 town to another. I've got my sights set on Tucumcari NM.

I ride off into the sunrise, yay! Not.

Apparently there's an early morning smudgie/bug on my camera lens that takes me waaaaaay too long to notice. Apologies, I'll try to stage my captures so it messes up the image as little as possible.

My route destination today is fairly early on. As I depart my hotel I'm still not sure if I'm going to take the time to check it out after my day of heat yesterday. However, I spent yesterday evening looking at the weather predictions for my route and it seems like today will se a comfortable 95F for the high temperature of the day. I can definitely handle that. So, I make the decision to hit my morning destination and swing through the Petrified Forest National Park, thus bagging my fifth National Park of the trip. Stickers and magnets are of course purchased at the visitors center.

Side note. At the Grand Canyon I presented my Veteran's ID to get in and was given the military park pass.

The guy at the Grand Canyon informed me that I'd just have to present this to get into the parks. However, the lady at the gate of Sequoia National Park read me the riot act about how I'm to present this AND my photo ID. I offered to get out my photo ID and she said it was fine and sent me on my way. I showed both this and my ID at Yosemite but they were more concerned with seeing my reservation pass to make sure I had that. Death Valley didn't have anyone to check, but instead had a vending booth that sold the access tickets, which irked me because I had to pay for that one. Oh well, if I only had to pay for one, that's not bad for all the enjoyment I got. It occurred to me riding off that maybe instead of putting my credit card in the machine that maybe it would have accepted my pass. Oh well. The best though was the guy at Petrified Forest. I handed him my pass and ID and he didn't even look at them, just handed them right back as soon as they touched his hands, and then being super friendly he engaged in a conversation with me about motorcycles. Crazy.

Petrified forest is a nice little ride through with some stops to check out. I should have stopped at the Crystal Forest but I was well past it when I realized what it was. 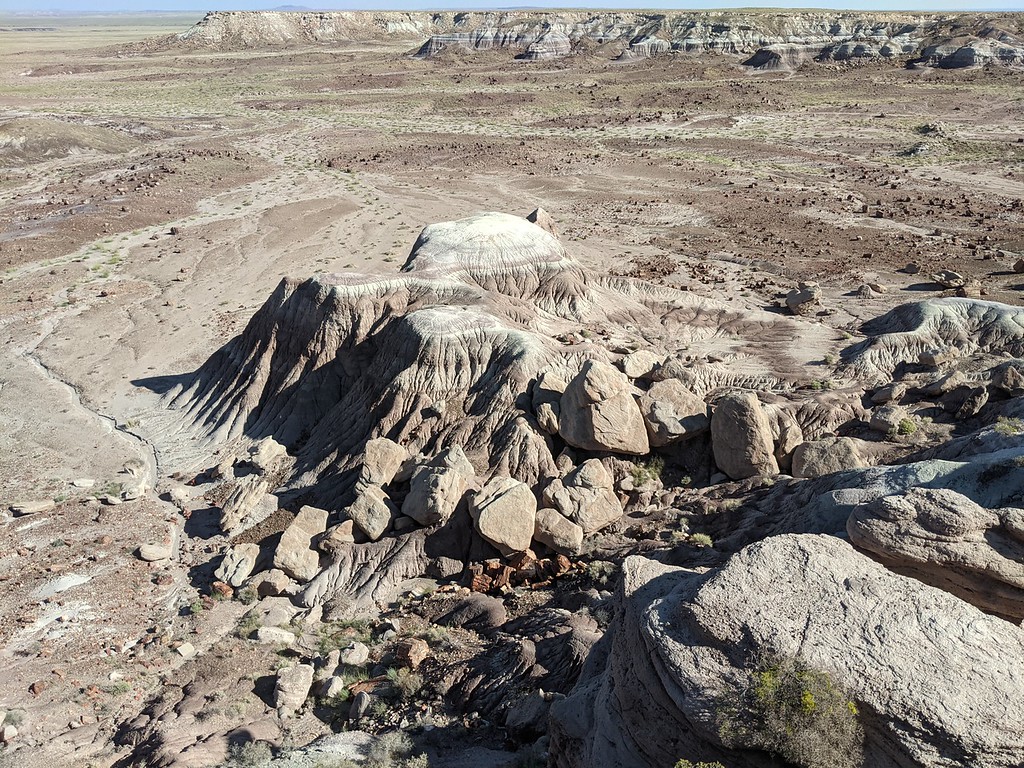 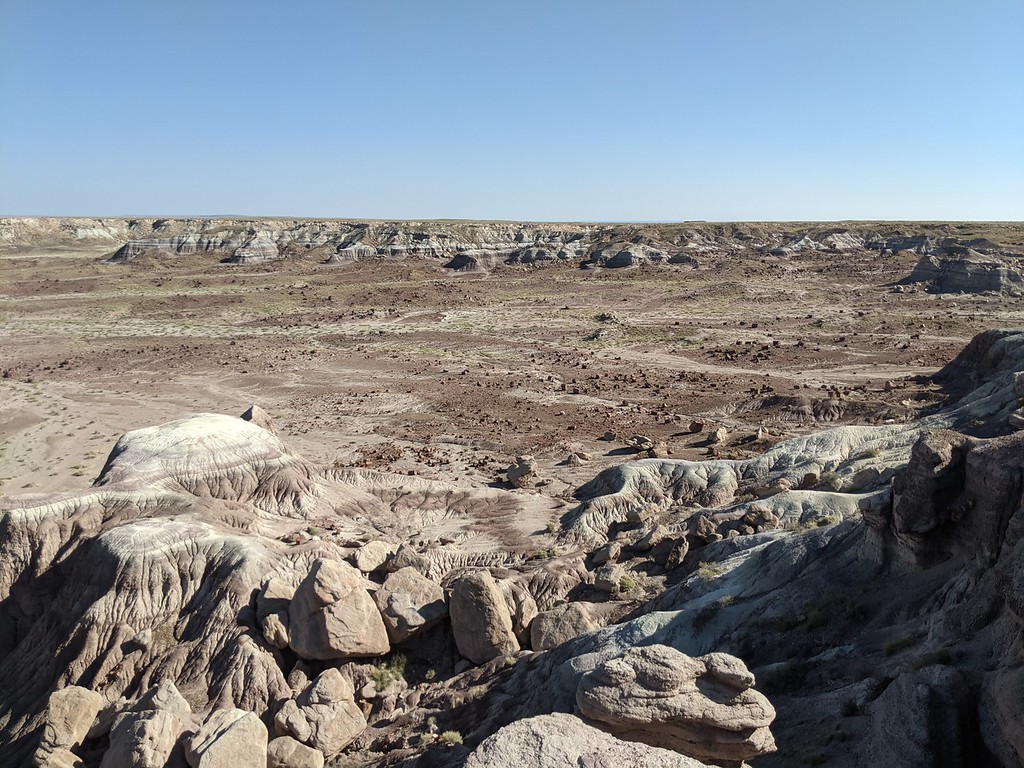 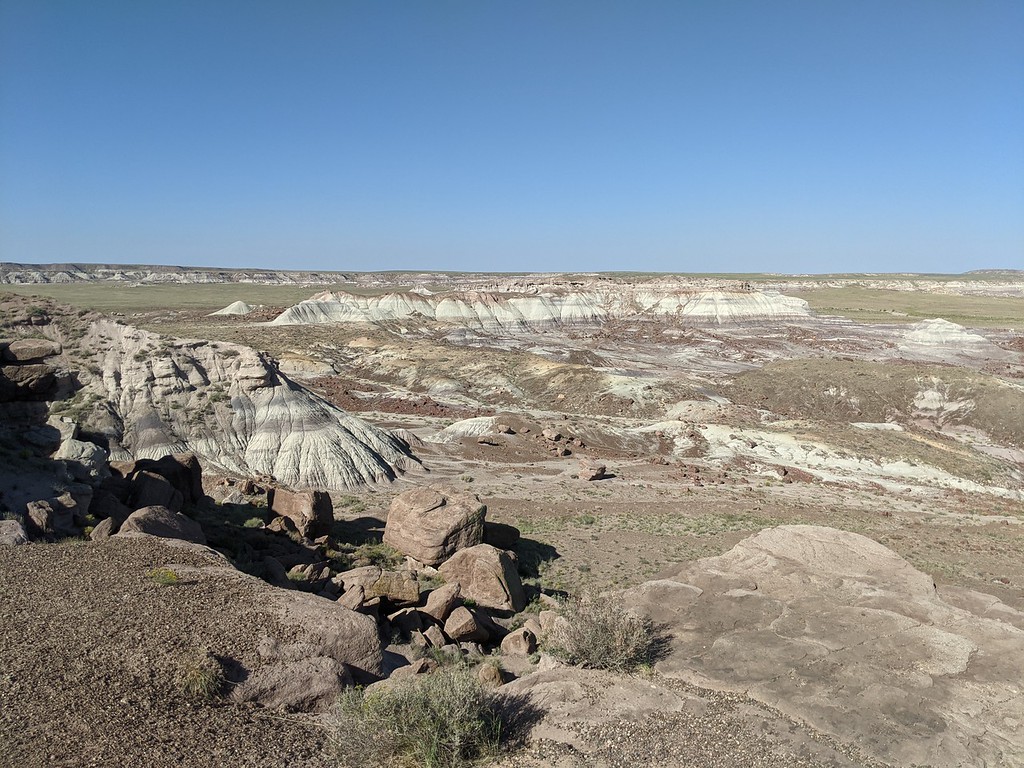 Once again, I'm walking back to my bike and am struck by the beauty of the old girl who is wrapping up the adventure with me.

Crossing back over I-40 with just a little more to see before exiting the park. 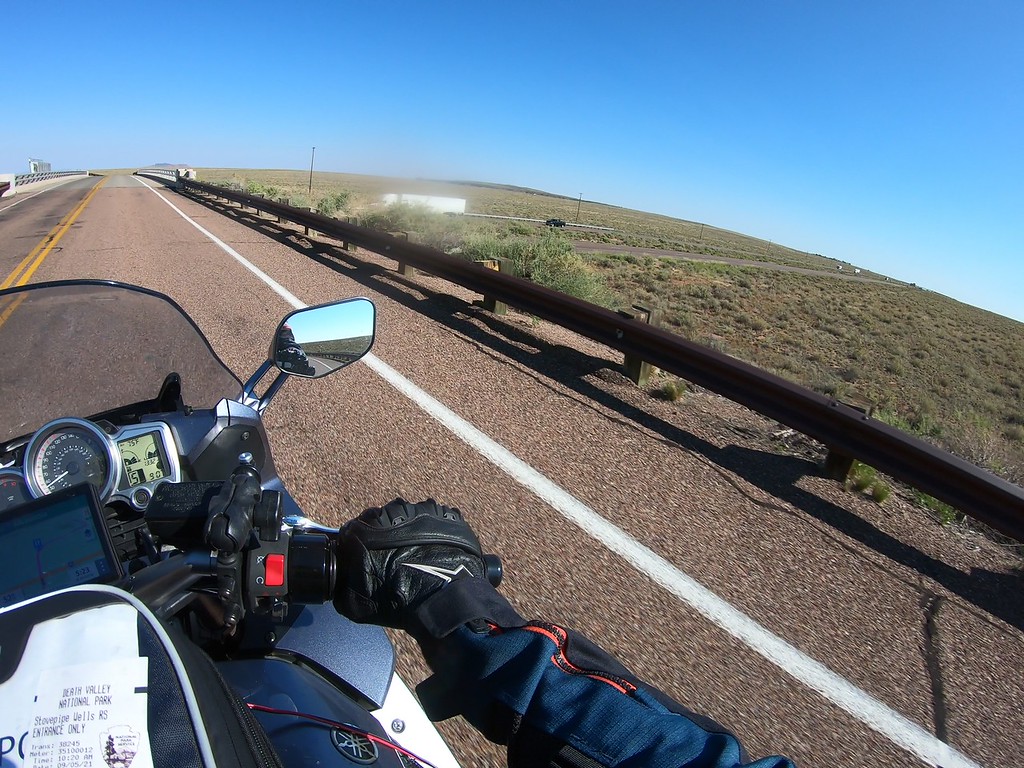 Then, I know it's going to be a boring day after this so I start messing with putting the GoPro in other locations, specifically on the Ram Ball on my brake reservoir. 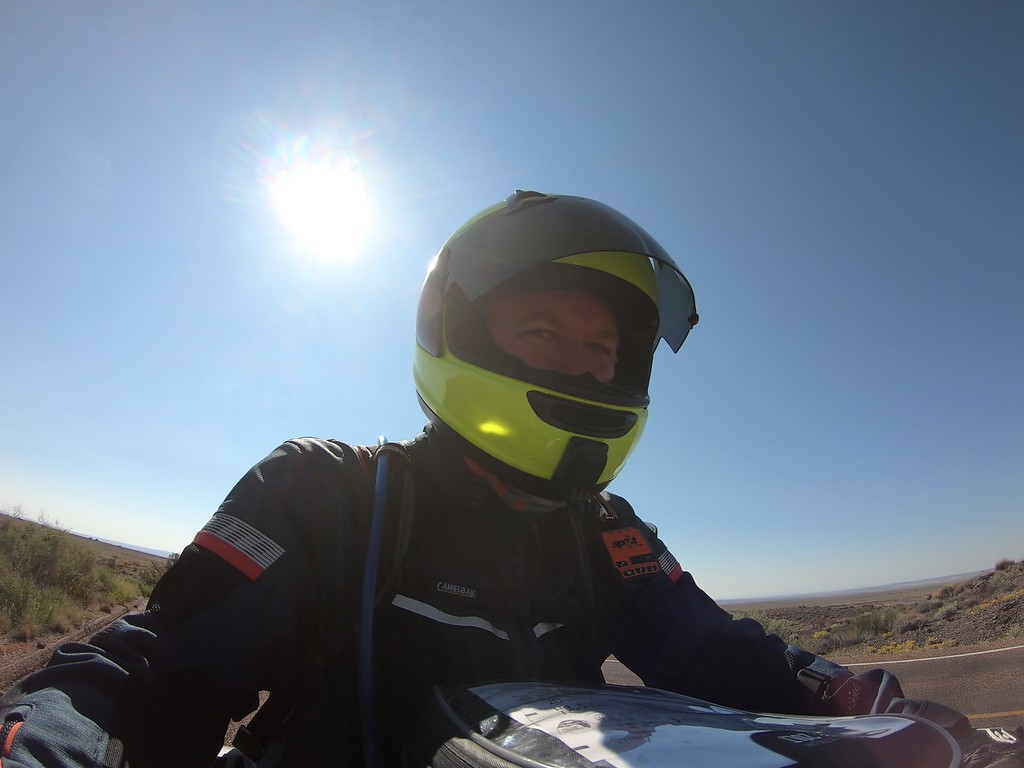 Still me, trying to figure out which way I have to go apparently. This also gives a good view of the chin mount that I usually have the GoPro attached to.

Trying to capture a sideways view of the passing scenery and the oncoming train. 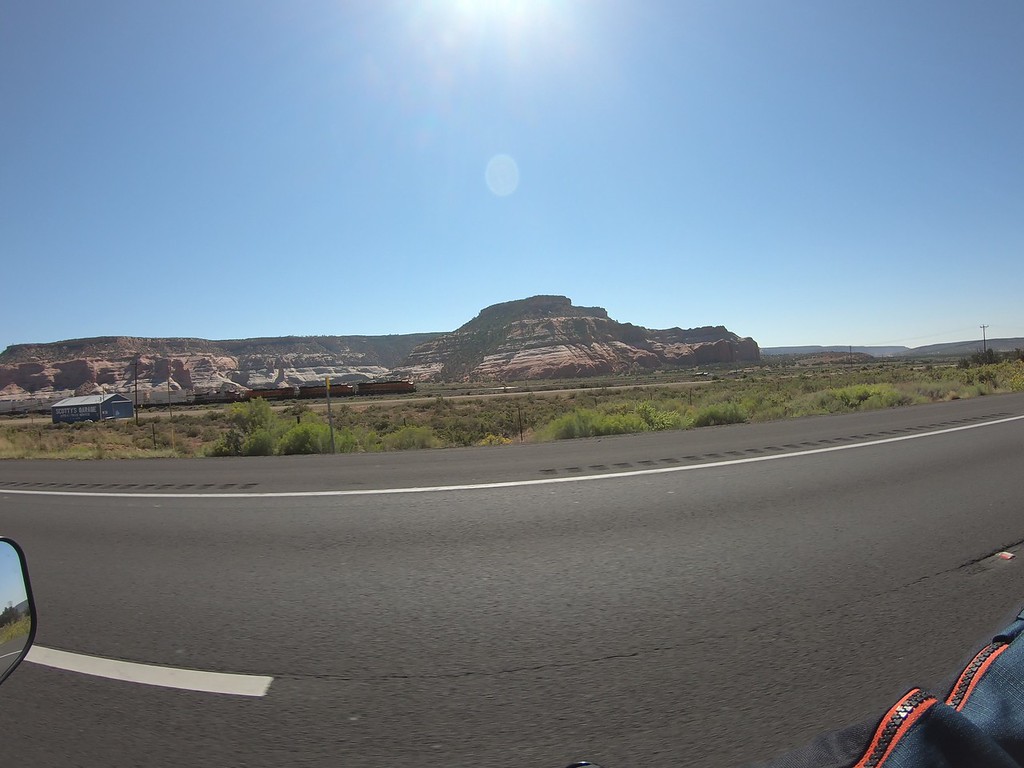 Not the greatest view.

Making sure I stay hydrated.

GoPro back on my chin, taking in the dwindling nice scenery as I continue to head East, knowing sooner or later I'll be back in the area of the country that is flat, hot, and boring.

And then I come to Albuquerque. I stop just prior at a truck stop and have some of whatever fast food restaurant is inside. The food is not memorable and there wasn't a reason for a photo. 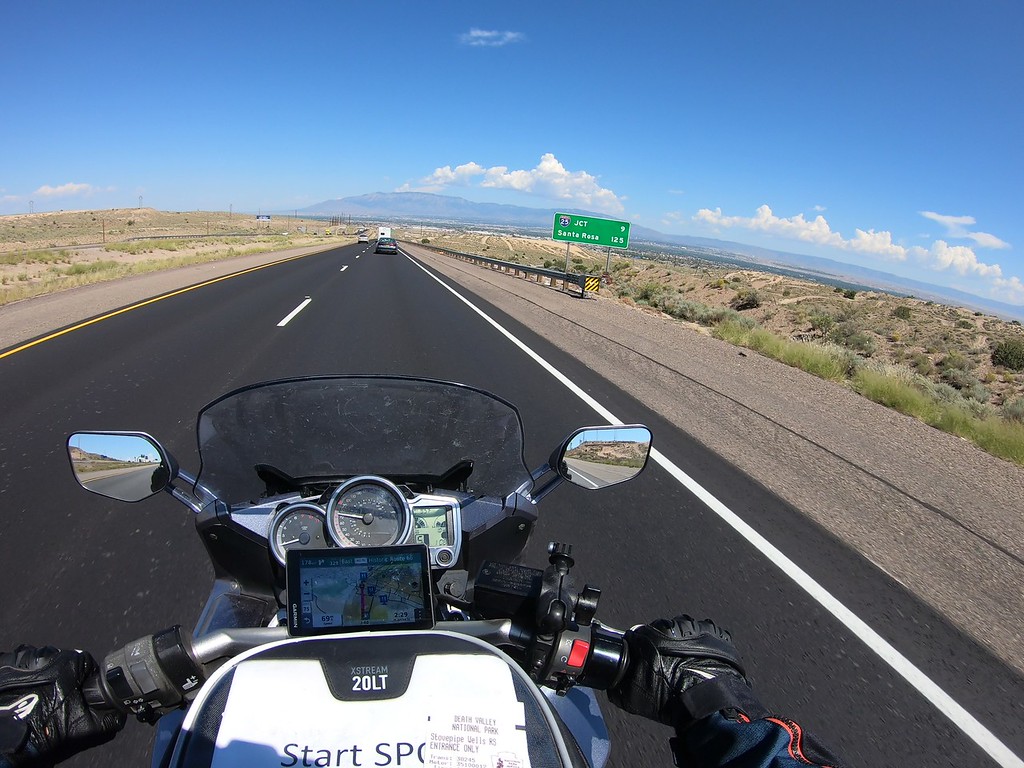 I'm quite surprised. I've been told that posting your spotwalla link on the forum and then passing through this city is a guaranteed way to find yourself pulled over by local law enforcement. I manage to zip through unscathed though.

For a long while I watch a column of black smoke in the distance. Most of the time it's off to my left, however, as I approach I see the road curve to the left and realize that there's trouble on my side of the highway.

Everyone is on their brakes headed for the left shoulder, me included. Well, all except that semi truck you see in my mirror that came blasting up on my right before he woke up and realized what was going on and hit the brakes pulling over and right behind me.

yep, somebody is having a bad day. 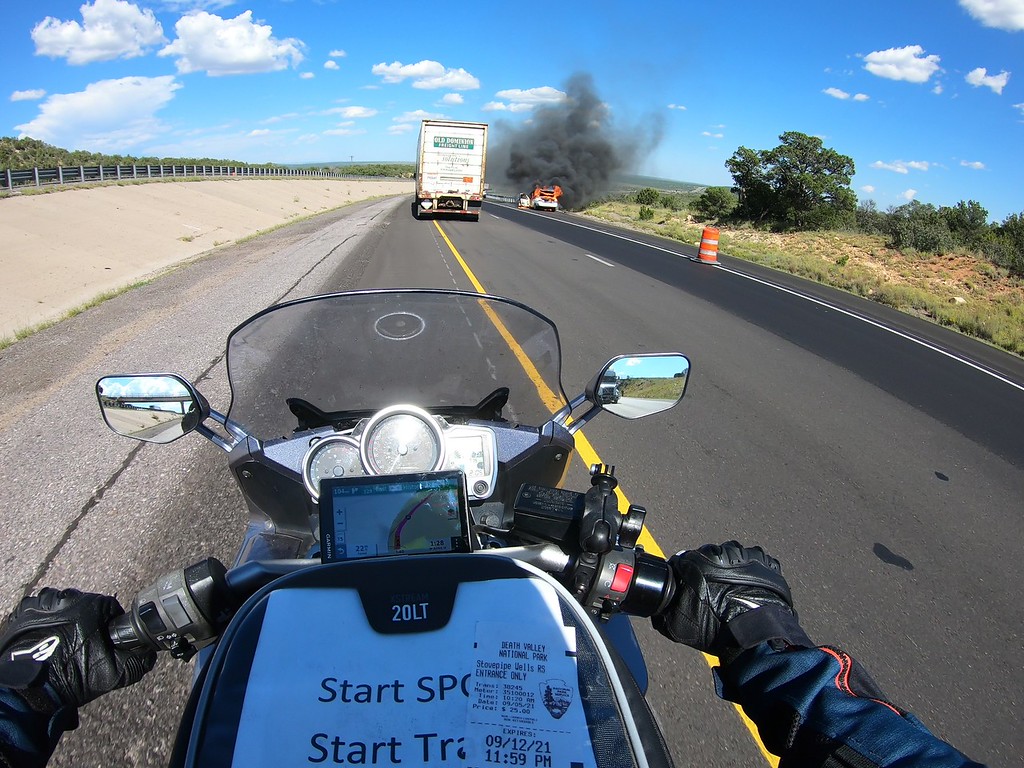 As I roll past it, I realize it looks like it started in the engine compartment and is burning it's way back, but hasn't reached the gas tank yet. That makes me quite nervous and feeling exposed as I roll by.

But I'm on my way and I end my day stopping into my favorite little motel in the world, the Blue Swallow Motel in Tucumcari NM.

It's changed owners but the new owner is just as friendly and helpful, and very proud of his little establishment. As he walked me to my room I started laughing and told him that this was my third or fourth time staying in this room. He was blow away that I've been there before, let alone that many times. I pointed out the one other room I stayed in my first time there and we got a good chuckle that I and my family have been in the same room ever since. 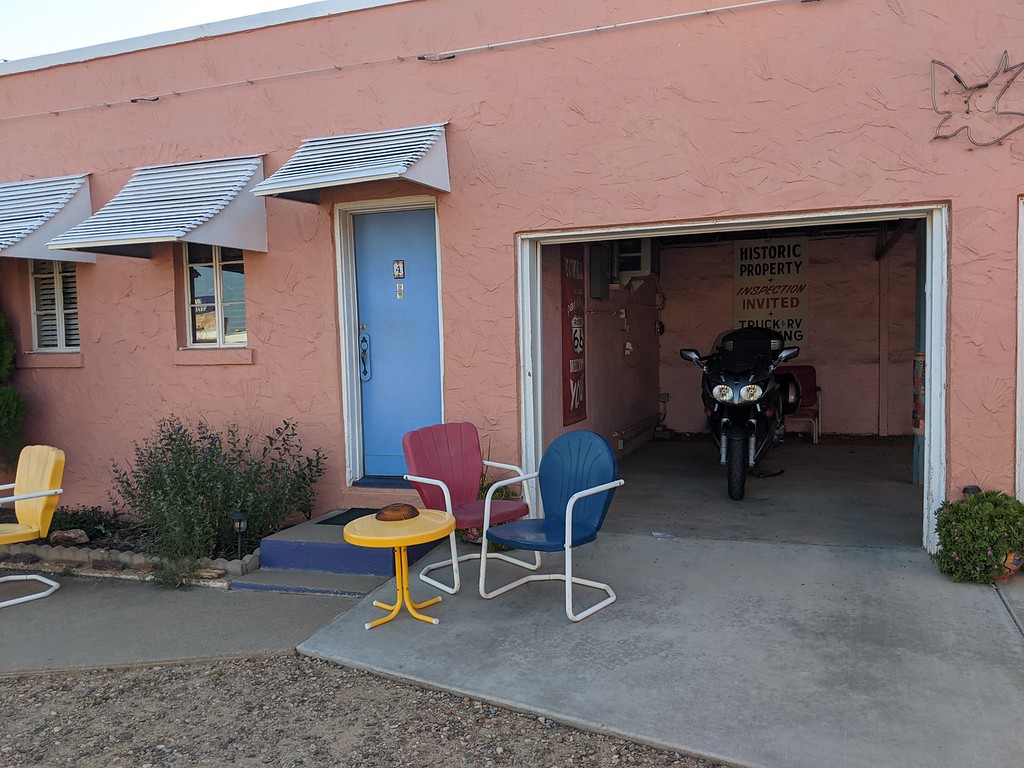 My meal is delicious.

Then it's back to the motel for a few beers as I enjoy the usual show of the fully restored neon lights from the old Route 66 era powered by the original restored power transformer. I've taken more photos before but I snap a few anyway.

This guy rolled in so I had to walk over and chat and take a few photos. He tells me it's all for show, and that he's in a hearse club and tells me about some of the other fully functional vehicles in the club.

Oddly, tonight the mosquitoes are pretty bad. They are biting despite me applying the spray that's been working for me the entire trip. I decide that I've seen the neon before and head inside a little early so I can get a head start in the morning. I'm close to the time zone line to enter Central Time Zone in the morning so I plan on a really early start so I can be home before my son gets off the school bus.

Posted by GixxerJasen at 2:13 PM